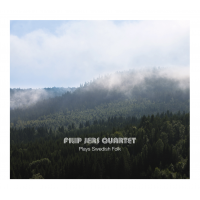 A difficult one, this: harmonica player Felip Jers and his quartet the latest in a long line of artists attempting to put a jazz slant on Swedish folk music. It all started in the 1960s when pianist Jan Johansson scored a massive hit with an EP and later an LP titled Jazz På Svenska (Jazz In Swedish).

Johansson's name is repeatedly invoked in the sleeve notes. His bassist, Georg Riedel, even contributes a whimsical foreword and two numbers from Jazz På Svenska are included in a bid to lend cred to Jers' enterprise.

Alas, the music doesn't measure up to the packaging. Johansson's arrangements were minimal, light and full of air. Jers' are cluttered and weighed down by an almost manic desire to say something new.

The harmonica not being the easiest instrument to listen to, folk music being of its nature simple and repetitive, problems arise early and persist. Add a decidedly heavy-handed drummer and you've got serious trouble.

It's not all bad. Henrik Hallberg plays some nice guitar on the opening track, "Slãngpolska efter Bruun." It's a traditional Swedish dance from Skåne, Sweden's southernmost province.

"Brudmarsch Efter Lars-Höga Jonke," a traditional piece from the northern province of Medelpad, was featured on Johansson's album. Jers wisely keeps it simple but then indulges in some highly inappropriate blues wailing on "Polska Efter Pers Olle," a traditional tune from the idyllic wooded, lake-studded central province of Dalarna, a world away from the Mississippi delta.

By now the desire may arise in more sensitive listeners to crawl up the wall. Relief is at hand: "Visa Om Ett Mord (Song About A Murder)" has its moments but then, on "Låt Till Far, (Song For Father)," an attractive tune from Dalarna, Jers switches once more to jarring blues mode.

Painful though this is, it is nothing compared to the piercing, nerve-shredding entity he has created out of the traditional song "Tusen Tankar (Thousand Thoughts)."

Long after the album has come to an end, grating harmonica phrases remain seared into a listener's consciousness.