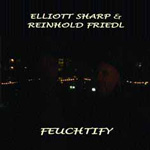 It moves stealthily, this music, and the range of its tonal palette belies the instrumentation. In his piano work Friedl utilises parts of the instrument other than the keyboard, while Sharp makes use of the time-honoured in the form of the dobro and the comparatively new in the form of a computer. And while it's often difficult to decipher the contribution of one from the other, a piece like "Pend" has the effect of throwing the distinction into sharp relief.

This duo's approach to improvisation is expansive,which makes for contrasts of a rare order. The agitated air of "Dis" is thus at odds with "Dict," which evokes a contemplative edge with Sharp's soprano sax set against a minimal backdrop of quasi-percussive sounds.

The eleven minutes of "Ify" are far from marked by logical development, and it could be argued that the subversion of the rule of tension and release (as it's heard on this piece) is a hallmark of this duo's work. Certainly their deployment of small, scarcely audible sounds is idiosyncratic, and the individuality of their methods is more than welcome; "Por" is a case in point in this instance.

Sharp's electric fretless guitar makes its presence felt most overtly on "Pel" and the sounds fashioned by that instrument and Friedl's work under the piano lid again bring forth highly personal music.

Thirteen tracks adding up to seventy minutes seem to be a good balance for this duo, and the programming is a key element in how deep the rewards this disc can offer. The stealth referred to at the top of this review might also mean that this music will offer up something new every time you put it in the CD player and hit "Play."