BY WOODROW WILKINS
July 5, 2005
Sign in to view read count 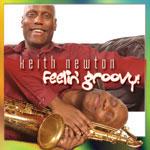 As a genre, smooth jazz often gets a bad rap. Sometimes that's deserved: much of what gets played on radio or promoted heavily elsewhere is more about the business than the artistry of music. Creativity takes a back seat to the idea that one has to fit into the mold. Once in a while an artist comes along who delivers music that's textbook smooth—and it may even include such gimmicks as catchy beats and programmed rhythm tracks—yet it still sounds fresh and original.

Enter Keith Newton, a web developer, technical support consultant, and musician. His self-produced debut, Feelin' Groovy, has all the ingredients for musical disaster: drum and bass synths, romantic melodies, and ten songs that fit neatly into the radio-friendly range of three and a half to under five minutes. Yet Newton goes beyond the tried and true. Handling all the instrumentation himself, with some supporting vocals on "You Should Be My Girlfriend and "My Song, he avoids the clichés and pitfalls that make so much smooth jazz mundane and uninspiring.

First off, the programming is subtle. Rather than a static bass line or drums and cymbals that sound more like someone scratching sandpaper and tapping a glass with a spoon than real instruments, elements that tend to distract from the exceptional leads of such players as flutist Alexander Zonjic or saxman Walter Beasley, Newton's programs complement his musicianship. At times, they sound close enough to the real thing that it doesn't matter; elsewhere, they're understated enough to allow the listener to remain focused on the sax or enjoy the overall sound.

Further, the songs are a combination of laid-back grooves, funk-inspired rhythms, and overall elegance. Make no mistake: Newton is unabashed in his attempt to capitalize on the sultry, sexy mentality that is so prevalent in the production and marketing of smooth jazz. What's different is those charactierstics actually fit this album—especially on "Jill, How Do You Like Me Now?, "You Should Be My Girlfriend, "All I Need Is You ..., and one that would be a shoo-in if song titles were eligible for awards: "Ooh You (The Bubble Bath Song). If nothing else, it proves Newton has a sense of humor.

Feelin' Groovy is an excellent recording debut. The music is appropriate for many situations, including a country drive, just chillin', and, of course, getting romantic. With a sound reminiscent of contemporary sax players like Kirk Whalum, Eric Marienthal, and Boney James, Newton is poised for a promising career.

Visit Keith Newton on the web.

Groove 4U; Jill, How DoYou Like Me Now?; And Only; Since You Seem So Far Away; You Should Be My Girlfriend; Shock The World; Ooh You (The Bubble Bath Song); All I Need Is You; My Song.