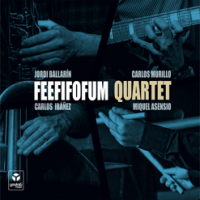 As Spain continues to produce quality jazz in its purest form, the Feefifofum Quartet is the latest Spanish band to release a commendable record worthy of further appreciation. Based out of Madrid, and taking their unusual name from a Wayne Shorter tune, the quartet is a no-nonsense, straight-ahead ensemble that hits on all cylinders. All four members have extensive education and training behind them, as well as accumulated credits on a number of projects by a myriad of artists.

A group of this high caliber was one that was bound to happen as they naturally gravitated toward each other, drawn by the complex challenges and scope of the music they are engaged in. The dozen tracks are a testament to their compositional skills as well, the writing distributed fairly among the members. The guitar of Carlos Murillo and tenor sax of Jordi Ballarín, dueling and sparring as the principal soloists, is a proven method that works well, both complementing each other melodically and harmonically. They open with the hard bopper "El Vuelco," showcasing the astute sax tone of Ballarín, stimulating a blend of guitar/sax exchanges that runs through the project. The easy going samba essence on "Abrázame," lays out a soft palette for guitar expressions, and the poly-rhythmic "Rectilini," by drummer Miquel Asensio, is a forceful foray into a more emphatic state of mind.

Bassist Carlos Ibáñez wrote the waltz oriented "9-3-93" which glides into a blues tinted improvisational exchange. That sweet spot where bop and swing merge is explored on "Mind The Gap," whereas "Progresión, is more of a free floater, with shades of astral jazz. The cowbell driven "Muñecota" comes off as an R&B groove with plenty of room to move, and in an unusual twist on the Benny Golson classic "Stablemates," the retro- bop leanings of "Unstable Moments," might arguably be the record's highlight, as all four players get to stretch out.

"Esperando," is another Ibáñez ballad, where he skillfully gives himself some space in the middle section for contrabass manifestation. Drummer Asensio reasserts himself with "Falsa Expectativa," a closet prog-rocker with shades of fusion for good measure, he also contributed the closer "Bekirent" which adheres to a similar formula. The gentle etude "Lucas," was composed for Murillo's son, presenting Ballaríns' grasp of the relaxed tempo, and the guitarists' security of playing the proper chord the song warrants.

Spain has diverse regional identities which makes up its national character. The four members of Feefifofum Quartet, each hail from a distinct region, and bring that cultural personality into the mix. Their mutual love for jazz is the common bond, but it is superb individual effort in musical cohesion that is impressive. This is an entrancing debut from musicians who play a music which is not inherently theirs, but have taken it to heart, performing jazz with the respect and dedication it deserves.