BY KURT GOTTSCHALK
January 25, 2004
Sign in to view read count 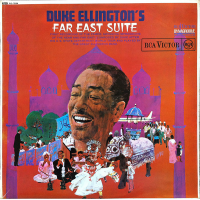 Duke Ellington's Far East Suite has never enjoyed the accolades lauded upon some of the Maestro's other major works. Black, Brown and Beige and Such Sweet Thunder are in the Ellington canon; Far East, it seems, was left behind.

That may be due to its dated Orientalism. It was recorded in 1966, a strange few years when jazz was looking to other cultures for inspiration but not embracing ethnic traditions the way it would in the coming decades (witness, for example, John Coltrane's Africa/Brass , from 1961, as compared to the actual African sources that were incorporated into jazz in the subsequent decades).

As such, "Tourist Point of View" is the most appropriately titled piece here. It might be regarded as less significant simply because of its geographical misnomer; except for "Ad Lib on Nippon" (composed in 1964 for the band's first trip to Japan), the pieces actually reference the Middle East, not the Far East. But more likely, Far East Suite hasn't been considered one of Duke Ellington's great works because it just isn't.

But it's a good one, and one that came at an interesting point in Ellington's career. It had been a good decade for the Duke. After his 1956 appearance at the Newport Jazz Festival, he had been remade. For the first part of the '50s, he was an old man dragging around a big band when small groups were the thing. But now he was an elder statesman. He and his composing partner, Billy Strayhorn, were pushing for—and often finding—bigger and better. But in 1964, Strayhorn was diagnosed with liver cancer and soon stopped traveling with the band.

Far East Suite was composed in fits and starts following the band's State Department-sponsored tour of Syria, India, Sri Lanka, Iran, Iraq and other countries. During the two years that Ellington and Strayhorn pieced it together (building off the Impressions of the Far East suite first performed in England in 1964), Ellington also premiered the music theater piece My People, wrote the music for a production of Shakespeare's Timon of Athens and, of course, toured his band as much as possible.

As a result, the nine pieces (three by Strayhorn) that make up the suite are scattered and lack an overriding theme; the concept is carried out in the titles more than the music. But it's still a good Duke Ellington record, which is to say it's a great record. Strayhorn's "Agra" is beautiful and "Nippon" is infectious. Duke Ellington's back burner was still hotter than most musician's ovens.

The new issue, the third at least on CD, retains some of the previously issued and alternate takes and adds five new takes, none of which add anything to the original. Duke's men knew what to do, and alternate versions don't provide much by way of alternative. The digipack restores the original cover art, if with a label-branding motif. It is, in other words, the big label trick of selling music fans what they already own. For those who don't already own it, however, it's another opportunity to hear a good piece of Ellingtonia.