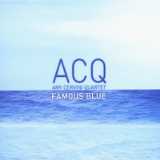 This debut album for singer Amy Cervini is an unusual release, with material that is packaged in a jazz setting consisting of Cervini's combo of piano, bass, drums and accordion. However, the material could easily have been presented by a contemporary urban singer/songwriter accompanying herself on acoustic guitar. The source material for these ten tracks is diverse enough to include a few selections from the Great American Songbook as well as material from contributing writers like Jonathan Brooke, Fiona Apple, bassist Edgar Meyer and the iconic Leonard Cohen.

If you're not overly familiar with some of the above names, it all falls within a tendency amongst vocalists to "mix it up" so that a typical set list contains examples of several musical genres without having to pigeonhole their own preferences. Amy and her brother Ernesto Cervini, originally from Toronto, are now part of the Downtown New York scene and familiar faces at such venues as The 55 Bar and The Cornelia Street Cafe. Cervini leads an active career, involved simultaneously in different musical projects. The remainder of the group consists of Michael Cabe, piano and accordion; Mark Lau on bass and Ernesto providing percussion, drums and clarinet.

The net effect of the album is to display the range of Cervini's material and delivery. Whereas you may have heard some of these tunes on pop radio or in more of a "folk" setting, they're set up in contrast to straightforward versions of Cole Porter's "Don't Fence Me In," the Billie Holiday/Arthur Herzog classic, "Don't Explain" and the Evans/Mann "No Moon at All." The title tune is a reference to Leonard Cohen's well- known "Famous Blue Raincoat." I rather enjoyed the introduction of accordion into Fiona Apple's "Extraodinary Machine" bringing a cabaret-type feel into the song.

Because I Told You So; How He Sings; Sliding Down; Famous Blue Raincoat; No Moon At All; Mushaboom; Extraordinary Machine; Don't Fence Me In; Don't Explain; Holiday.