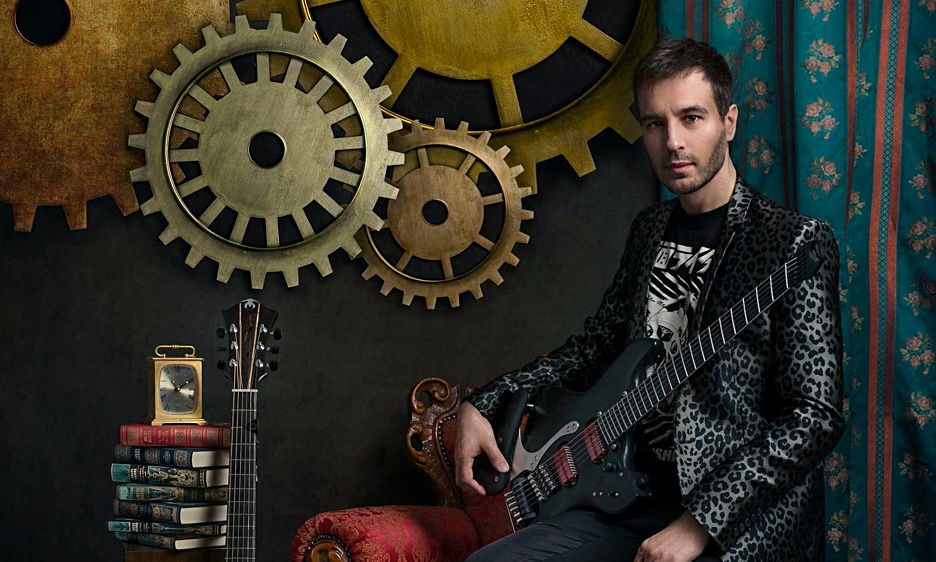 Italian guitarist Fabio Mittino has performed in the Asheville, NC-area Streamside Concerts house concerts series in his acoustic duo with Bert Lams (of the California Guitar Trio) playing the music of Gurdjieff/De Hartmann. So he was a natural for inclusion in the Asheville-based Keep Music Live Project series of online concerts (a collaboration between Streamside Music, Dream Guitars, Fretboard Journal, Deb Cornish Audio, and Asheville Music School).

Mittino plays acoustic and electric guitar, but for this set (broadcast from Milan, Italy) he stuck to electric. It was a striking stage setup: mostly white (even the loudspeakers) with a large gold gear for accent. Mittino cut a striking figure with his black guitar and stylish, mostly black clothing. He began the set with a driving pattern repetition piece with what sounded like synthesizer doubling, and echo. Announcing that most of the music he would be playing comes from his most recent Simple Music For Difficult People album, he briefly described the elaborate electronic processing system he employs for live performances, which includes looping, delay, pitch shifting, and pre-recorded tracks. He noted that knowing what all of those terms meant was not required for listening! And indeed this listener soon gave up on trying to figure out exactly how the sounds were produced. This was also the first instance of the use of screen within a screen video displays (in this case the album cover art), which was effectively used (when appropriate) throughout the show.

The next tune was one of several "Miniatures" he has recorded. It was densely orchestrated, with multiple guitar lines. It is easy to hear his experience with guitarist Robert Fripp's Guitar Craft training, as well as his involvement with the California Guitar Trio. Speaking of his use of the old-school ring modulator (a device frequently employed in early electronic music), he said that the metallic sounds it produced reminded him of automata (in fact his most recent album is subtitled Automata Saga), which inspired some of the titles, as well as music videos featuring him performing with automata. This segment included "The March of the Old Robots," "Fantasy," "Miniature One" and "Fractured Memories" (a new composition receiving its first public performance).

The march made good on both the promised march rhythm and the ringing robotic tones. It included not only a lovely sustained melody—a voice that Mittino called upon several times during the show—but also a rocking solo (not to mention some rapid intricate picking patterns with a strong Guitar Craft flavor). "Fractured Memories" had ring modulated patterns played live, accompanied by pre-recorded power chord accompaniment (the only clearly pre-recorded sounds in the set). "In the City of K" had literary inspiration (Hungarian writer Ágota Kristóf's Trilogy of the City of K novels). He described it as a soundtrack he heard as he read it, and it represents another extra-musical influence in his work. He usually plays it on acoustic guitar, but presented the original electric guitar arrangement.

The next segment included "The Dance of the Thin Robots," "Ikigai" and "Shining Roads." He wrote the last for his wife, and it has been recorded by the California Guitar Trio for their forthcoming album (he joked that they play it better than he does). This is another tune that he usually plays on solo acoustic guitar, but used the original electric guitar arrangement. The concert ended with "Froodles," a shimmering arpeggio exercise from one of the earlier Simple Music For Difficult People albums. It is a shame that Mittino cannot come to us in the current circumstances, but this virtual concert was an excellent substitute.