The California Guitar Trio (CGT) celebrates its twentieth anniversary with the release of Andromeda in October 2010 on Innerknot Records. As a special commemoration, the new CGT album will also be released on vinyl through Karate Body Records.

“Andromeda represents a culmination of all our work together in the past 20 years,” says guitarist Bert Lams. We have released numerous CDs over the years, but there's none like this one,” Lams continues. “Andromeda is the first album containing nothing but original material, combined with improvised pieces. The integration of structured, thought-out pieces with the loose and spontaneous improvisations is something we've never done before.”

The California Guitar Trio is Paul Richards of Salt Lake City, Utah; Bert Lams of Affligem, Belgium; and Hideyo Moriya of Chiba, Japan. The trio first met in England in 1987 while studying with iconic King Crimson guitarist Robert Fripp. After touring together as part of Fripp’s League of Crafty Guitarists, the three guitarists convened in Los Angeles and founded The California Guitar Trio in 1991.

“When we started the band in 1991, it was only a California project, and no one knew how long it would last,” reminisces Moriya. “Yet something good always happened to keep us going when times were tough. It is great to reach 20 years with Andromeda, and we have good energy to keep going.”

The CGT plays a unique style, with guitars weaving an intricate knot work of interlocking parts to form a whole. Richards, Lams, and Moriya can create music which sounds like it is performed on a kind of “super-piano” and at other times unfolds in an ethereal, otherworldly psychedelia.

In space, CGT’s music was played to wake the astronauts aboard the NASA space shuttle “Endeavor”. Here on Earth, the trio’s music has been featured extensively on NPR, NBC’s Olympics coverage, and various CBS, CNN, and ESPN TV programs.

“This new CD captures a balance between the pure acoustic sound and the processed electrified sound of the CGT, something we've experimented with before, but not to this degree,” says Lams.

Richards expands on the CGT’s distinctive recorded sound: “With each recording, we have been striving to achieve the best of acoustic analog recording techniques blended with the use of electronic guitar effects and digital processing. With Andromeda, we have achieved a new level of the acoustic/electric blend. Our original music continues to evolve with years of detailed and refined interaction among trio members.”

Having played with a Who’s Who of great musicians over the years, Andromeda features guest performances by Tony Levin, Julie Slick, Eric Slick, Tom Griesgraber, and Tyler Trotter.

The cover of Andromeda also serves to celebrate another 20th anniversary, that of the Hubble Telescope. The CD cover image, designed by Pablo Mandel, features a photo from the new camera on the Hubble. The CD cover has earned a prize in the European Space Agency’s Hubble Pop Culture competition. Show less

The Old Church
Portland, OR 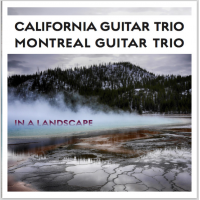 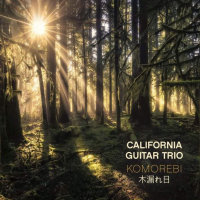 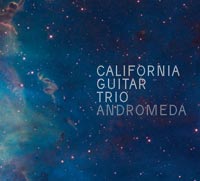 From: Andromeda
By California Guitar Trio

All About Jazz musician pages are maintained by musicians, publicists and trusted members like you. Interested? Tell us why you would like to improve the California Guitar Trio musician page.