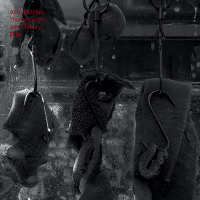 The trio of saxophonist John Butcher, synthesiser player Thomas Lehn and pianist John Tilbury had a certain inevitability about it. Although they had not recorded together prior to this album, each of the three possible pairs had done so—Lehn and Tilbury when the Englishman recorded the extraordinary The Hands of Caravaggio (Erstwhile, 2002) with MIMEO of which Lehn was a member, Butcher and Tilbury when the saxophonist joined AMM to record Trinity (Matchless, 2008), and Butcher and Lehn when the latter was a member of the large John Butcher Group which recorded Somethingtobesaid (Weight of Wax, 2009) at the 2008 Huddersfield Contemporary Music Festival. Consequently, they understood and were familiar with each other's playing when they got together to record this album at City University Music Studios in June 2012.

That familiarity means that there are no tentative introductory exchanges here and, throughout, the music is characterised by a relaxed sense of calm and confidence. In this case, though, familiarity should not be equated with cosiness, complacency or travelling down well-worn pathways, far from it. This threesome is very different to any of the contexts in which those pairs met, so there is plenty of fertile ground to be explored here... and these three are up to the task. None of them dominates the trio and they contribute equally, each providing an impressive array of stimuli that move proceedings along and challenge the others. That is all done very subtly and smoothly with no surprising u-turns or jump cuts.

While Tilbury and Butcher both display their customary creativity and variety, it is Lehn's synth that is the most mercurial of the instruments as the German manages to find a broad spectrum of sounds to fit in around the piano and saxophone and complement them. Yes, here we have three experts at work, doing what they do best. It is difficult to think of a more pleasant way to pass an hour than in the company of this delightful album....