By Eyal Hareuveni
August 13, 2013
Sign in to view read count 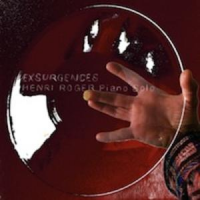 Self-taught French pianist Henri Roger's set of solo piano free improvisations is spread across a DVD directed by video artist Anne Pesce, and also on vinyl. These nine improvisations, all numbered as "Exurgences 1" to "9," have a similar dense and restless character.

Roger explores the sonic possibilities of piano keyboard, stressing the lower range as he sustains these sounds and forms a dramatic and intense, string of continuously colliding overtones. The first and longest improvisation, the 28-minute "Exurgences 1," sounds as if Roger is not attempting to structure it in any binding form, but just lets the sounds flow in an intuitive manner, deliberately not attaching himself to any sonic occurrence—slowing the pace and softening its strict atmosphere only in its last minutes. The accompanying video, showing straight lines between specific locations all over a static black and white globe, adds little to the sonic experience, and after a while becomes redundant.

The following improvisations and their accompanying videos offer additional yet different aspects of mostly static, monochromatic sonic and visual experiments. The "Exurgences 2" is lighter, with a changing urban landscape captured at different times of the day, while "Exurgences 3" is more tight and nervous, with a view of vinyl turning around.

The fourth improvisation stands out as the most arresting. Roger uses the piano strings as a percussive surface and the percussive sounds that he produces from rubbing and plucking the strings correspond with the conventional keyboard playing, creating a nuanced, mysterious texture, accompanied with a changing landscape view from a driving car. The fifth, spare improvisation, emphasizes again the accumulative, meditative effect of exploring the overtones.

The other four improvisations, documented on the vinyl, continue in a similarly restless vein, mainly "Exurgences 6," with over 16 minutes of dense sonic investigation of clusters of chords. But these improvisations also suggest changing moods and colors, like the "Exurgences 7," which even has a surprisingly emotional, balladic touch, or the minimalist "Exurgences 8." The final, short and melodic "Exurgences 9" even sounds as though it was influenced by the solo piano excursions of Keith Jarrett.

Comprehensive and challenging, yet often too long, Exsurgences is an investigation into the form of free improvisation.