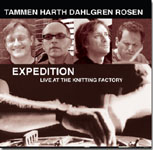 Shards of sound leap forth without hesitation or preamble. Tearing guitar and saxophone squalls compete with the thrumming bass and frenetic drums on the appropriately titled, "Setting Out With Aggressive Intent. The impact is immediate. Expedition: Live at the Knitting Factory is an improvisational adventure for guitarist Hans Tammen, tenor saxophonist/bass clarinetist Alfred 23 Harth, bassist Chris Dahlgren and drummer Jay Rosen.

Recorded in 2001, the near-hour long set is subdivided into ten pieces, though it is really one long, unfolding improvisation. The divisions merely cue the obvious shifts in emphasis and the titles hint at motivations, such as "Taken at a Leisurely Pace and "A Place That Has Emotional Significance. These signposts help listeners approach the sonic density of the quartet that sounds bigger.

Tammen's self-described "endangered guitar style slashes through idiomatic norms, conjuring soundscapes and stabbing intensity. Harth's doubling of reeds with contrasting timbres extends the group's textural range, as does Dahlgren's use of electronics. At times it is difficult to know who is playing which parts; for added mystery, even trumpet-like sounds emerge on "Setting Out... and "A Long Trip by Water.

The music is not an unrelenting maelstrom. Though ideas are rapidly exchanged, the musicians evince careful listening and are as adept in the quieter passages as in the blowouts. On "Taken At..., Dahlgren's hypnotic bowed-bass mantra murmurs beneath Harth's tempered bleating and Tammen's nuanced manipulations. Rosen propels "Many Have Passed Rigorous Courses with a martial snare shuffle, eliciting a bout of tightly focused group interplay. He and Tammen seamlessly lock into a rockish groove during "A Long Trip..., belying the intrinsic spontaneity.

The improvisation is intense and must have been a powerful experience for the audience. But like many live recordings of free improv, the interactive energy is necessarily lost in translation to disc. Knowing this only adds incentive to observe such seasoned improvisers in the moment.