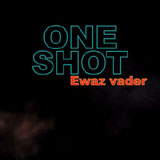 Released in 2006 on the small label adjunct to Le Triton club in the east end of Paris, Ewaz Vader deserved to be on "best of" lists for fans of fusion with a progressive rock and occasionally metal edge. Formed in 1999 by then-members of French art rock group Magma as a one-off sidebar, One Shot released its first, self-titled album independently the same year. The group ultimately continued, releasing the live Vendredi 13 (Soleil 06, 2001) and now Ewaz Vader, making its name more an in-joke, but there's nothing funny or superfluous about the music this quartet makes.

Ewaz Vader's four extended tracks, all clocking in at between ten and fifteen minutes, are split compositionally amongst the three Magma alumni—keyboardist Emmanuel Borghi, guitarists James Mac Gaw and Philippe Bussonnet—with drummer Daniel Jeand'heur a no less important part of the group's take-no-prisoners approach. This is not fusion for the faint-at-heart; this is fusion for those who like it complex and almost relentlessly intense. Still, despite that the group is no stranger to dynamics, creating plenty of tension and release on one of the freshest fusion albums in recent years.

While the way that Bussonnet's title track uses repetition to build its unyielding forward motion has some precedence in the music of Magma, that's about as far as it goes. This music has more in common with that of The Inner Mounting Flame-era Mahavishnu Orchestra, although the comparison is more about One Shot's raw, unbridled energy than any kind of stylistic similarity. While John McLaughlin's MO playing was, to some extent, prototypically metal-edged, with Mac Gaw the reference is more direct, with distorted whammy bar swoops, wild bends, crunching rhythms and high velocity phrases. Still, he also possesses a surprising finesse, making his ensemble playing tightly synchronous with Borghi and his solos brimming with imagination.

No less musically resourceful, Borghi provides the group's most advanced harmonic language, occasionally pushing his electric piano into gritty overdrive as he layers sophisticated chords over Bussonnet and Jeand'heur's powerful grooves. Bussonnet and Jeand'heur's thundering sound, and their ability to keep the engines stoked regardless of the meter while transcending the role of mere timekeeper, helps give One Shot its remarkable edge.

Borghi's "Fat" begins with solo electric piano, evolving into a brooding, dark melody that builds in intensity, with Mac Gaw gradually embellishing it and setting the stage for an inventive modal solo from Borghi that's one of Ewaz Vader's many peaks, matched and raised by Mac Gaw's abstruse, Adrian Belew-tinged solo.

Borghi's "I Had a Dream (part III & IV)" pushes the envelope even further, his lithe synth solo leading into a mind-boggling ostinato where Mac Gaw's outrageously textured playing redefines what a solo can be. The twists and turns of the guitarist's "Missing Imperator" close the album with a combination of visceral energy and sophisticated challenge.

For fans of uncompromising, pedal-to-the-metal fusion, it doesn't get much better than this.