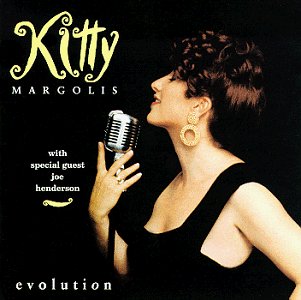 This is an amazing album. There are few jazz singers with the range of expression of Kitty Margolis, a singer equally at home in bop, blues and ballads. Possessed of unerring pitch and flawless enunciation, Margolis can also scat with the best of them. Indeed, her versatility brings to mind Ella Fitzgerald and Carmen McRae. In this album we hear Kitty Margolis in almost every style imaginable.

Margolis begins bop anthem “Anthropology” unaccompanied and at a breakneck speed and delivers a truly inspired performance. In “I’m Old Fashioned” the singer turns the tune on its head and gives an intense reading of the old ballad with the able assistance of tenor sax giant Joe Henderson. The two later team up for a swinging version of “Gone With the Wind.” Brazilian composer Ivan Lins’ “Evolution” is the album’s title track and Margolis hits the mood exactly right in this English language song. Joyce Cooling’s guitar solo is a textbook example of understatement and taste. “Midnight Sun” is a tune that has been overlooked for too long by singers. Its sophisticated text and highly chromatic melody is ideally suited for Margolis and she delivers one of the finest recorded versions of the Lionel Hampton/Johnny Mercer song.

Margolis also demonstrates that she knows a thing or two about the blues in “Someone Else Is Steppin’ In” where she gives a throaty performance in the best blues shouting tradition. The album ends with Stephen Sondheim’s “Where Do You Start?” performed by just the singer and Dick Hindman on piano. Sondheim’s tune is all about the pain of separation, and Margolis’ performance makes this pain come alive, a pain that is only matched when you have to separate yourself from listening to this extraordinary album.

Anthropology; I'm Old Fashioned; Evolution; Ancient Footprints; Midnight Sun; Nothing Like You; Please Send Me Someone to Love; You Don't Know What Love Is; Firm Roots; Tristesa de Amar; Gone With the Wind; Someone Else Is Steppin' In; When Lights Are Low; Where Do You Start?