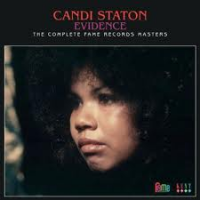 American roots musician Jason Isbell, on his live recording Jason Isbell and the 400 Unit Live in Alabama (Lightning Rod Records), performed a potent cover of Candi Staton's "Heart on a String," recorded at FAME Studios in Muscle Shoals in 1970. In that performance rests an entire history of American music of the period. Muscle Shoals and FAME Studios were, in their heyday, making music—and a lot of it—of a quality not heard since.

The key operative here is hard to identify. Is it vocalist Candi Staton, Fame Records or FAME Studios? Or, is it all of them? Yes, perhaps that's the best context. With neo-soul, neuvo-R&B or whatever silly label is being put on the likes of the late Amy Winehouse, Robin McKelle, John Legend and any number of artists, it is nice that a collection like Candi Staton—Evidence: The Complete Fame Records Masters is available to demonstrate what this music called soul sounded like originally, meaning at ground zero at 603 East Avalon, Muscle Shoals, Alabama.

The Staton-FAME relationship began in 1968 with future husband Clarence Carter ("Slip Away," "Patches") brought the young singer in to meet partner Rick Hall. The association resulted in three albums, 12 singles, 36 sides altogether. For this collection, an additional 12 tracks previously unreleased, including Staton's final FAME session before going to Warner Brothers in 1974, are present, rounding out this exceptional Southern soul snapshot of the state-of- the-art in "Muscle Shoals" sound of the period.

Staton's stay at FAME was bisected by the defection of the "Swampers," bassist David White and Big Neighborhood, guitarist Jimmy Johnson, drummer Roger Hawkins and keyboardist Barry Beckett in 1969 to form what would become the Muscle Shoals Sound Studio. Staton did not miss a lick, becoming the centerpiece of FAME studios during the period before moving on to Warner Brothers and a successful disco career, before settling into Christian broadcasting and forming the Atlanta- based Beracah Ministries. Staton returned to secular music in the 1990s, releasing "You Got The Love" and gaining a prominent following in the United Kingdom.

While at FAME, Staton and the studio experienced great success during the five years in which she recorded for them. "I'd Rather Be An Old Man's Sweetheart (Than A Young Man's Fool)," "I'm Just a Prisoner (Of Your Good Lovin)" and "Sweet Feeling" all charted well, representing the songwriting stable at FAME. She had equal or better success with her covers of Tammy Wynette's "Stand By Your Man" and Mac Davis' "In The Ghetto," all included on Evidence. Of the previously unreleased material, standouts include "Slipping Away," "Are You Just Building Me Up," and a plaintive and powerful cover of Dolly Parton's "Jolene."

By the measure of music success and influence, Staton was no Aretha Franklin. But this takes nothing away from the fact that she is a Southern soul singer with few peers. Evidence provides a cultural documentary of a set of musicians, a studio and a place in time that never ceased throwing sparks at every turn.

CD1: Someone You Use; I'D Rather Be An Old Man'S Sweetheart (Than A Young Man'S Fool); You Don't Love Me No More; Evidence; Sweet Feeling; Do Your Duty;That's How Strong My Love Is; I'm Just A Prisoner (Of Your Good Lovin'); Another Man's Woman, Another Woman's Man; Get It When I Want It; For You; Never In Public; Heart On A String; Stand By Your Man; How Can I Put Out the Flame (When You Keep the Fire Burning);Mr. And Mrs. Untrue; Too Hurt To Cry; He Called Me Baby; That Old Time Feeling (Sweet Feeling); To Hear You Say You're Mine; What Would Become Of Me; Freedom Is Just Beyond the Door; Where Were You; Do Right Woman. CD2: Trouble, Heartaches and Sadness; Spread Your Love on Me; Do it in the name of love; Darling You're All That I Need; Blackmail; In The Ghetto;Wanted: Lover; Best Thing You Ever Had; Lovin' You, Lovin' Me; I'll Drop Everything and Come Running; Thanks I Get For Loving You Sure as Sin; It's Not Love; Something's Burning; I'm Gonna Hold on (To What I Got This Time); Love Chain See; Slipping Away; One More Hurt; Lovin' the Easy Way; Are You Just Building Me Up; I'll Be Here; I Gave a Little and Lost a Lot; Jolene; We Had It All.