Ira B. Liss Big Band Jazz Machine: Everything Under the Sun

BY JACK BOWERS
September 1, 1999
Sign in to view read count 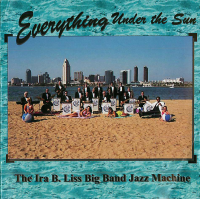 The second release by the San Diego–based Ira B. Liss Big Band Jazz Machine is quite well–named. Perhaps an even better name would have been “everything but the kitchen sink.” The band is all over the map in a session that is evidently designed to showcase its many talents for the purpose of securing gigs.

Along the way, the BBJM touches bases with Louis Prima (twice), Duke Ellington, Glenn Miller, Johnny Mandel, Kool & the Gang, Cole Porter, Rodgers & Hart, John Williams (the theme from Superman, beautifully played by high–flying trumpeter Jeff Beck) and a number of others. Beck returns to the stratosphere with fellow trumpeter Doug Meeuwsen on Ray Santos’ “Sunny Ray Mambo” (which really cooks). The band shows it can play for dancing on Mandel’s “Emily” (featuring a lovely solo by alto Alan Pruett), Robert Kraft’s samba “Beautiful Maria” (featuring Meeuwsen and alto Lee Elderton), R&H’s “Dancing on the Ceiling” and “My Heart Stood Still,” “You Make Me Feel So Young” and Miller’s familiar theme, “In the Mood.” Also framed for dancers are the vocal tracks, Ellington’s “Satin Doll” (Karen Gallinger), Porter’s “I Concentrate on You” and Irv Kahal/Sammy Fain’s “I’ll Be Seeing You” (Jimmer Bolden).

For more hard–working dancers, there’s Prima’s “Jump, Jive and Wail” (with vocal chorus and someone, maybe Bolden, doing a Jimmy Rushing impression) and “Sing, Sing, Sing” (with Dave Castel De Oro on tenor and drummer Charlie McGhee sitting in for Krupa). For the younger set there’s Kool & the Gang’s “Celebration” (featuring guitarist Jim Storey). Rounding out the program are splendid arrangements of the standards “You and the Night and the Music,” “Day by Day” and “You Make Me Feel So Young” (on which trumpeter Beck again flexes his chops).

The BBJM has been together for 20 years, and has few problems with any charts placed on the stand. Recording quality is good with the exception of Carl Hammond’s piano, which sometimes sounds clinky and intrusive. Aside from that, and vocalists who are no better than fair–to–middling, The Jazz Machine is an admirable — and we mustn’t overlook versatile — regional ensemble that shouldn’t have much trouble finding steady work.

Jump Jive an’ Wail; Dancing on the Ceiling; Can You Read My Mind; Sunny Ray Mambo; Emily; You and the Night and the Music; Satin Doll; Sing, Sing, Sing; Beautiful Maria; Celebration; I Concentrate on You; My Heart Stood Still; Day by Day; I’ll Be Seeing You; You Make Me Feel So Young; In the Mood.