By BRUCE LINDSAY
September 1, 2014
Sign in to view read count 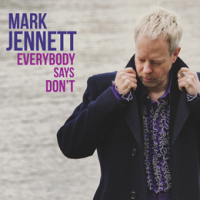 On Everybody Says Don't, his second album, London-based singer Mark Jennett joins a bunch of top flight instrumentalists, including producer Geoff Gascoyne, on a collection that takes in an impressive array of songs, composers and moods. Great songs, interpreted with style.

The pace drops for a ballad reading of Cole Porter's "Just One Of Those Things": sadly, a little too slowly to retain interest, but it's a brief drop in quality. Rogers and Hammerstein's "You've Got To Be Taught" follows on: a bright, up-tempo, rendition that sparkles with energy. Andy Panayi solos on tenor and flute; Hammerstein's lyrics have a very contemporary message; it's a fine ensemble performance. "There's Gotta Be Something Better Than This" gets a stripped-back, blues accompaniment (Barron's outstanding again, this time on electric keyboards), Jennett trading the optimism of the Sweet Charity version for something less hopeful.

On Joe Bushkin and John DeVries' "Oh, Look At Me Now" accompaniment is supplied by Gascoyne, on acoustic bass, and De Krom, sparingly but once again with swing. Jennett responds with one of his best performances. Two Bacharach and David songs, beautifully performed, offer stark lyrical contrasts. Jennett captures the singer's suspicion and anxiety on "Are You There (With Another Boy)"—the tale still resonates, even if internet streaming might now replace the radio. The melody of "Wives And Lovers"—performed here in 5/4—is still gorgeous, but reminders to the wives to look their best to keep their husbands from straying ("men will be men" after all) don't sit comfortably today even if David may have been less than serious.

Two of the finest songs could be said to come from the New American Songbook. For Paul Simon's "Train In The Distance" Jennett is tender and romantic. Gascoyne adds a touch of glockenspiel to Randy Newman's "Simon Smith And The Amazing Dancing Bear," highlighting the song's odd, fairytale, storyline. Jennett sings with such honest acceptance of the tale that it's not hard to imagine the vocalist wandering into London's finest establishments alongside his hirsute (and potentially fierce) companion.

Altogether, Everybody Says Don't stands as a fine showcase for songwriting, music production and performance. Jennett is a singer who understands and immerses himself in the stories the songs are telling: it's a talent that shines through on this enjoyable album.

Everybody Says Don't; Are You There (With Another Boy); Wives And Lovers; Some People; There's Gotta Be Something Better Than This; How Long Has This Been Going On; Just One Of Those Things; You've Got To Be Carefully Taught; Hurry, It's Lovely Up Here; Oh, Look At Me Now; Train In The Distance; Mixed Up Guy/Magic Garden; Simon Smith And The Amazing Dancing Bear; Slow Boat To China.