Charlie Rich: Every Time You Touch Me (I Get High) / Silver Linings / Take Me / Rollin' With The Flow

BY JAKOB BAEKGAARD
September 1, 2016
Sign in to view read count 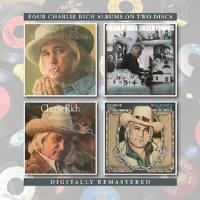 There is an anecdote about the legendary singer Elvis Presley, who walked into the office of Sun Records to do an audition. He was asked by receptionist Marion Keisker what kind of singer he was and Presley answered: "I sing all kinds."

The same could be said about another Sun Records-affiliate, the pianist, composer and singer, Charlie Rich. Rich never got as famous as Presley, even though he was just as talented, but he released a steady stream of high quality records on different labels and also scored a significant string of hits, the most well-known being the double smash from 1973, "Behind Closed Doors" and "The Most Beautiful Girl."

Rich was billed as a country artist and recorded with Nashville session musicians, but he couldn't really be pigeonholed into a single genre. He drew from the deep wells of gospel, blues, jazz, country, soul, pop and rock 'n' roll. The result was a sophisticated kind of music that was earthy and rhythmically vibrant, but also luxuriously lush and elegant. The center of it all was his velvety soulful croon. Rich had a jazz singer's ability to sculpt phrases and could explore every nuance of sweetness and heartache with shades of blues.

Unfortunately, many of Rich's records are currently out of print, so it is cause for joy and celebration that the eminent reissue label, BGO Records, has chosen to rerelease four albums from his time at Epic Records: Every Time You Touch Me (I get High) (Epic, 1975), Silver Linings (Epic, 1976), Take Me (Epic, 1977) and Rollin' With The Flow (Epic, 1977).

The title track from Every Time You Touch Me (I get High) is a prime example of Rich's ability to sing a piano ballad. In a grand setting with harps, strings, steel guitar and choir, he maintains a tactile intimacy with a smoky voice that sings: "when you fingers touch my skin / that is when I start to live again." Many singers with less integrity than Rich would easily fall into the pitfalls of kitsch with lines like these, but somehow he is able to pull it off and it is simply because he sings with a heart full of conviction.

The key to understanding Rich's artistry is his ability to get into all kinds of material and sing it with passion. His eminent gospel album Silver Linings is a good example of this. Here, the strings are replaced by rollicking blues piano and gospel. Rich's version of "Sometimes I Feel Like A Motherless Child" is hard to better as he embodies the desperation and blue mood of the lyrics, starting just with piano and voice and slowly adding choir, drums and sweeping steel guitar.

Rich also had a soft spot for jazz and his countryfied reading of Duke Ellington's "Mood Indigo" is filled with respect for the master while he adds new layers of meaning to the melody. Rich was so fond of the composition that he would return to it again on his late masterpiece, Pictures and Paintings (Sire, 1992).

Together the four albums in this package give a complete picture of the musical versatility of this gifted artist, but it is not enough Charlie Rich. The fact that only two songs from this package, "The Milky White Way" and " Since I Fell For You," found their way into the double-disc compilation Feel Like Going Home: The Essential Charlie Rich (Columbia Legacy, 1997) says something about the abundance of good Charlie Rich music and another package from BGO would be welcome.

However, the lengthy liner notes are slightly disappointing. It is often the nature of pop music liner notes to examine chart positions, but the writer seems to care too much about them and too little about getting into the heart of the music on the particular albums. He also voices his own negative opinion about the value of gospel albums, which is highly ironic, considering that Rich's album Silver Linings is considered as one of the great country gospel albums and a highlight of the set.

Still, there is some solid biographical information in the notes, but those who want to have a better and more passionate introduction to Rich are adviced to seek out the excellent portrait in Peter Guralnick's essay collection: Feel Like Going Home: Portraits in Blues and Rock 'n' Roll. The book is appropriately named after a Charlie Rich composition, just one of the great pieces that Rich contributed to the canon of American music.

CD1: Silver Linings): Will The Circle Be Unbroken?; Down By The Riverside; Why Me; Were You There?; Old Time Religion; Just A Closer Walk With Thee; Swing Low, Sweet Chariot; Amazing Grace; The Milky White Way; Sometimes I Feel Like A Motherless Child

CD2: Take Me): On My Knees; Easy Look; Even A Fool Would Let Go; Mood Indigo; Where Do We Go From Here?; Spanish Eyes; Take Me; Wisdom Of A Fool; My Lady; Road Song; Rollin’ With The Flow.

CD2: Rollin’ With The Flow): Somebody Wrote That Song For Me; Windsong; That’s What Love Is; Night Talk; Beautiful Woman; To Sing A Love Song; Love Survived; Somewhere In My Lifetime; That’s The Way A Cowboy Rocks And Rolls.

Title: Every Time You Touch Me (I Get High) / Silver Linings / Take Me / Rollin' With The Flow | Year Released: 2016 | Record Label: BGO Records