Bill Bruford/Michiel Borstlap: Every Step a Dance, Every Word a Song 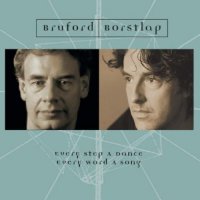 Drummer Bill Bruford has certainly come a long way since his emergence with Yes in the early '70s. While his interest in jazz was evident in the improvisational aspect of his 25-year association with King Crimson, his mathematical sense of precision and disposition towards mind-boggling subdivisions of rhythm often precluded the kind of elasticity required to approach the looser demands of jazz. As early as '83, however, Bruford was experimenting with the intimate conversational nature of the duo on recordings with Swiss pianist Patrick Moraz, a strong precursor of what was to follow with the formation of his Earthworks Mark I group featuring Iain Ballamy and Django Bates. Still, as wildly exploratory as that group was, and as comfortable as Bruford was at creating natural-feeling grooves in challenging meters, it would take a dozen more years and the creation of his all-acoustic Earthworks Mark II group before he would truly reconcile his predilection for challenging compositional form with a looser, more elastic playing style.

Since the release of Earthworks Mark II's début, A Part, and Yet Apart (Summerfold, '99), Bruford's playing style has loosened up to the point where he is now a far more in-the-moment player, responsive to his musical surroundings. So when he met Dutch pianist Michiel Borstlap in '02 and began playing duo shows that were less about the confines of structure and more about what Bruford terms "performance-based" music—music of the moment where spontaneity and interaction were the predominant factors—it seemed as though Bruford had made yet another leap forward. With the release of Every Step a Dance, Every Word a Song , an album of live performances culled from dates performed in Europe during '03 and '04, Bruford's evolution is confirmed.

While Bruford and Borstlap are still more concerned with form than, say, Italian pianist Enrico Pieranunzi—whose recent album with Paul Motian, Doorways , is another beast entirely—the reciprocation between the two jumps out from the first notes of the more structured "The 16 Kingdoms of the 5 Barbarians." Bruford's liner notes allude to the fact that the performance space impacts the nature of the musical dialogue—smaller rooms having "the intimacy of a dinner table conversation between old friends,'? while larger venues "naturally become a bit more muscular and assertive." Still, on more introspective pieces including the title track, the anthem-like "Inhaling Shade," and an abstract, yet faithful reading of Monk's "Round Midnight," Bruford may gently assert the forward motion, but he's also become a masterful colourist. And while Borstlap's supplementing of his piano with electronic keyboards sometimes gives the duo a broader complexion, the subtleties of their exchange are never overshadowed by sheer demonstrativeness.

Every Step a Dance, Every Word a Song may not be as great a step forward for Borstlap, already a well-established jazz figure, but it represents one more advance in the pursuit of a more instinctive and natural approach for Bruford, an artist who has, for all intents and purposes, left his rock roots completely behind him.

The 16 Kingdoms of the 5 Barbarians; Bemsha Swing; Inhaling Shade; One Big Vamp; 'Round Midnight; (announcement); Every Step a Dance, Every Word a Song; Stand on Zanzibar; Swansong.