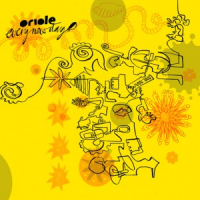 There's a stark beauty to Every New Day, the third album from Oriole, that speaks of the majesty of vast open spaces. For the most part, the warmth and splendor of these spaces gives the music a positivity and optimism, but there are also times when it takes on a more downbeat and reflective quality. The combination results in a gorgeous collection of tunes, an album of genuine beauty.

The open spaces that inspired the music on Every New Day are those of the Iberian Peninsula, where guitarist, composer and band leader Jonny Phillips lived before returning to the UK and recording the album. The rhythms with which he underpins the tunes come from Spain, Portugal and Latin America. Phillips shows a command of these different rhythms in his writing: the band shows a similar command in its playing.

Every New Day is yet another example of the strength-in-depth of the F-IRE Collective. In his multiple roles, Phillips is the most emphatic presence on the album—his brief introduction to the exquisitely pretty "Mountain Flower" is a rare example of Phillips' solo work, mostly he's adding light but vital rhythmic touches—but he's surrounded by some of the most innovative players on the British scene, all members of this London-based collective.

Bassist Ruth Goller and drummer Sebastian Rochford—best known as a duo for their partnership in Acoustic Ladyland—show a gentler side to their playing on this album. Rochford's light, flowing drum patterns combine with Goller's warm, mellow bass and Adriano Adewale's array of percussion to set down some exquisite grooves.

The front line players each bring distinctive sounds to the band. Cellist Benjy Davis is particularly notable: his playing on "Levante" establishes the mood of this beautiful yet poignant piece from the opening bar. On "La Sonrisa Picara," his cello solo heightens the romanticism of the tune and adds a touch of late-night mystery.

Phillips formed Oriole in the '90s. A few years later, a flurry of activity found the band releasing two albums in relatively quick succession—Song For The Sleeping (F-IRE, 2005) and Migration (F-IRE, 2006)—before Phillips moved to Cadiz. Six years on, Every New Day is an emphatic display of Oriole's talents. Hopefully Phillips is ready to take the band to the forefront of the UK scene, where it surely belongs.