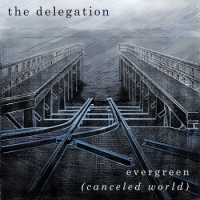 Stretched out over two discs and featuring a 13-piece band that includes a string quartet, two vocalists and a dedicated person on "additional electronics" Evergreen (Canceled World) totally lives up to its larger-than-life sweep and scope. The brainchild of keyboardist and composer Gabriel Zucker, the Delegation's music is rooted in the edgy sort of modern / avant jazz one expects from the Brooklyn scene. Yet it goes off into all sorts of interesting tangents which encompass various forms of contemporary classical music, indie rock, and old-school progressive rock. It's all cloaked in a moody, pensive atmosphere which conjures dark forebodings and dystopic nightmares. Considerable stretches of this sprawling 2 CD set will appeal to fans of the Rock In Opposition movement: think Henry Cow, Art Bears, Tone Dogs, Sleepytime Gorilla Museum, Thinking Plague, etc. Yet, there's a jazzy flow and looseness to the performances on Evergreen (Canceled World) that even the most accomplished progressive rock bands often lack.

The concept behind Evergreen (Canceled World) germinated indirectly from a separate fully- notated score that Zucker presented as his senior thesis at Yale University. Seeking an approach that also involved improvisation, Zucker encountered the future members of The Delegation while attending the Banff Jazz Workshop. Something obviously clicked for all of them, because the group re-convened in New York shortly thereafter to work on Zucker's new magnum opus. Trumpeter Adam O'Farrill, familiar to jazz fans for his work with Rudresh Mahanthappa, Stephan Crump, and his own band, Stranger Days, is the only widely-known quantity in The Delegation. Yet the entire ensemble is more than up-to-snuff. Unfortunately, the album doesn't include liner notes, and solos are not credited, so individuals can't be singled out here. Suffice it to say that everyone in The Delegation—and Zucker in particular—really knows how to wail. Zucker's pieces, while offering spacious moments and extended passages for various subsets of the ensemble (e.g., the tense piano / trumpet / strings ruminations in "Headlight Imprecise (Summaries I)" and "3.5 Rotations (Evergreen III)"), get pretty dense and chaotic at times, befitting the grand tradition of the always rebellious ESP Disk label.

The electronics and vocals are more than just an overlay on Zucker's long-form, genre-transgressive opus. Electronics are not part of the front line. Rather, they are subtly woven into ensemble passages and occasionally used as live treatments on instrumental or vocal soloists. The vocals, on the other hand, are a central component throughout Evergreen (Canceled World). Neither vocalist sings in a "jazz" style. In fact, the vocals are performed in a manner analogous to the aforementioned RIO groups Henry Cow and The Art Bears. Sometimes the voices are way out in front, sometimes they're almost subliminally buried in the ensemble, and sometimes they're subjected to subtle electronic manipulations. There's definitely a narrative thread here, but it's rather inscrutable. Both vocalists have a lovely crystalline sound; and though they sing with classically-trained precision, their phrasing is fluid and rhythmically sophisticated. Much the same can be said of the string players, each of whom are also improvisers (though their role as soloists is lesser than that of the horns and piano). The rhythm section is also rock-solid, yet flexible and able to negotiate Zucker's polystylistic pieces with grace. Though Evergreen (Canceled World) is not a jazz recording per se, jazz fans will savor the dynamic, improvisational, horn-dominated selections such as "Bare (Evergreen I)" and "Recover (Disregard II)." However, the majority of this ultimately rewarding 2-disc set is devoted to Zucker's much wider set of musical interests. And that's not a bad thing!