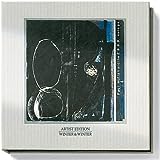 Paul Motian has been the integrated center of several prominent piano trios between 1955 and 1977, including those lead by Bill Evans (with Scott LaFaro), Paul Bley, and Keith Jarrett. Striking out on his own in the late '70s, Motian began the Electric Bebop Band, originally with Joshua Redman and two electric guitarists. Motian uses this same line up for his latest Winter & Winter outing, but adds a second saxophone. Dividing his two reedists and two guitarists between the two channels of stereo makes for quite the listening experience.

In keeping this the spirit of his last number of releases ( Play Monk and Powell, 2000 + One, Flight of the Bluejay, all on Winter & Winter), Motian mixes his and his band's intelligent originals with often obscure bebop tunes by the masters of the style. The current Europe is no exception. Here we have a diminutive reading of Monk's "Oska" and a probing interpretation of his "Introspection" bookending Bird's "Birdfeathers" and Motian's own moody "Blue Midnight". "Birdfeathers" is like Janus looking in both directions. It begins as a straight ahead bebop blowing session with a Jimi Hendrix acid trip in the middle. The overall effect is exhilaration and breathtaking pleasure.

is a velvety opulent and intelligently paced contemporary jazz recital; one that smacks of more class and taste than anything lesser talents might conceive is. Europe makes this writer want to seek out more of this same music. I suspect that is the true goal of all great music— to replicate itself.