EU Sax Band of 12 Looks Across the Pond 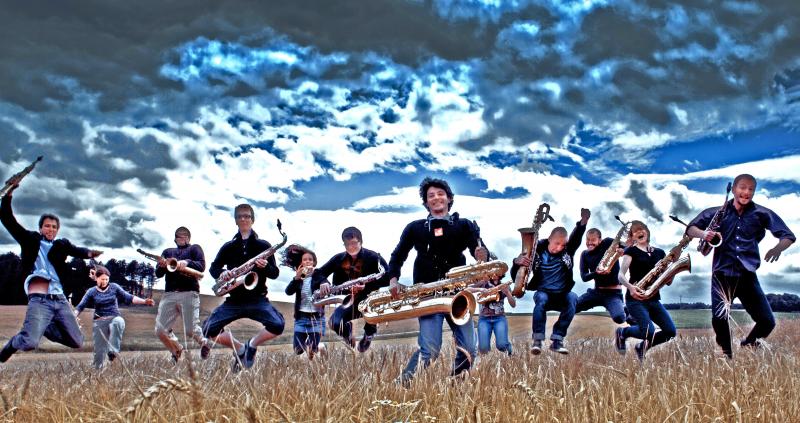 Imagine a band of 12 saxophonists from 12 countries and musical backgrounds, with a touring calendar of at least 10 indoor and outdoor venues-including a marketplace and a train station-from July through December, 2012.

Meet The European Saxophone Ensemble. Aged 18 to 34, the players range "from a virtuous contemporary reeds soloist to a punk baritone, from a jazz tenor to an Afro-soul Scandinavian baritone, from a chamber soprano to an alto playing in Eastern European traditional ensembles."

Although the original compositions are tonally challenging and rhythmically complex, improvisation is a vital element of the avant- garde band's repertoire. The musicians don't set up music stands, and often move around while playing their basically memorized scores. Movement and changing space are used to vary the acoustic experience for the audience. "Whether or not they like it," one musician commented, "people don't fall asleep."

"We would love to tour in America and we're looking for a way," Joana Oliveira of the EU's MET-X Productions told me. Please visit the group's website for more details.

"Meaning: noun: 1. A style of music characterized by improvisation, 2. Etcetera (in the phrase: and all that jazz), 3. Nonsense. And verb tr.: 1. To enliven (in the phrase: to jazz up), 2. To exaggerate or lie. Etymology: Of undetermined origin, perhaps a variant of slang jasm (energy, vigor). Earliest documented use: 1912."

Back in September 1968, a professor of ethnomusicology, Alan P. Merriam, and this writer published a paper, "Jazz: The Word," in the Ethnomusicology journal. We traced it back to 1914 and could only speculate on its origin. The French verb, jaser (to chatter or babble), was a possibility; another was the alleged Arabic jaz, apparently meaning "the cutting off." That could have been passed into the Creole tongue. Today, the Arabic news network's name, Al Jazzera (or Jazira), has the surviving co-author speculating again.

Jesper Thilo, Denmark's veteran tenor saxophonist and raconteur, broke up a packed room this fall at Valby Kulturhuset in Copenhagen with yarns about Louis Armstrong. When Satchmo began touring with his band in the northern states before he was a big name, said Thilo, "he put up a banner outside a theater in a small town where he was playing: The World's Greatest Trumpet Player.

Three trumpeters from a symphony orchestra in town saw it, and went backstage to tell Armstrong they planned to sit right in front of him, in the first row, that night. Satch was delighted. "In the first set you'll hear more high Cs than you ever heard before. And when I'm through with that, I'll start on the Fs." Adds Thilo: "Harry "Sweets" Edison told me this story, so it's probably just a lie."

"Strange Fruit" Lyricist was a Poet and Activist

The man who wrote "Strange Fruit," the blues-imbued outcry against race hatred, was inspired by a photo of a lynching. Billie Holiday, who helped set the words to music and immortalized the song, probably knew this. But how many today know that Abel Meeropol, who wrote the lyrics, was a poet and social activist?

Meeropol (1903-1986) attended and later taught for 17 years at Dewitt Clinton High School in the Bronx-a seedbed of talent. Clinton junior Richard Rodgers wrote his first song ("Dear Old Wigwam") with former Clintonite Lorenz Hart ("My Funny Valentine," "Where or When?).

The Harlem Renaissance started with publication of Clinton senior Countee Cullen's poems in the school magazine. James Baldwin and Burt Lancaster went to Clinton. So did Neil Simon, Richard Avedon and Ralph Lauren. It's all in The Castle on the Parkway (Hutch Press, 2009), by Gerard Pelisson and James Garvey.

Stevie Wonder Pulls Out His Harmonica in Ronnie Scott's

"Just done the late set at Ronnie's. Stevie Wonder was in the audience. So we're playing a blues and all of a sudden this harmonica starts playing. Hold on I recognise that sound. S... he's sitting in his seat playing through a radio mic. HOLY S... Then he gets on the piano and plays 'The Masquerade is Over.' Humbled to say the least. One of the true musical greats. Amazing night."

Courtesy of the European Saxophone Ensemble