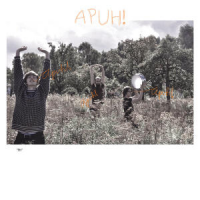 APUH! is a young Swedish trio based in Gothenburg. Its musicians— saxophonist Adrian Åsling Sellius and drummer Hampus Öhman- Frölund began working together in 2011 and a year later double bass player Matt Dimming joined, to seal the trio's aesthetic and sound. They freely draw elements from pop and rock, free jazz, experimental noise and even klezmer during open-ended, improvised pieces.

All five songs in this debut stress its playfulness and strong rhythmic basis, as well well-versed knowledge of the American free- jazz of the sixties, especially on the most coherent effort, the opening "Hållbara ballonger," suggests. The other pieces feature the ambitious sonic palette of the trio. "A German from Russia" is introduced as a cinematic story that happens in a sensual, exotic place but suddenly explodes in climatic, nervous force before returning to a more reserved form.

"Krokensjön" focuses on inventive experimental searches for a common sound, gently gravitating into a delicate, fractured pulse. "Malmö II" alternates back and forth between the classic American, muscular free- jazz school and a European, sound-oriented, non-linear school of free improvisation with impressive command and expressive interplay. This short recording is concluded with "Do Androids Dream of Electric Sheep?," titled after the famous science- fiction novel by Philip K. Dick. It gently adapts the same approach as the opening rhythmic piece, but in a much more subdued manner.