By DAN MCCLENAGHAN
July 6, 2007
Sign in to view read count 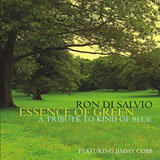 Essence of Green is pianist/composer Ron Di Salvio's nod to the music created by Miles Davis and his sextet on the classic album, Kind of Blue (Columbia, 1959). The sound that opens the album on "Six Shades of Green" is unmistakable: that elastic, slow-loping rhythm from Davis' "All Blues," with bassist Rodney Whitaker front-and-center here, backed by a simmering, just-a-hint ahead-of-the-beat drummer wielding the sticks with sublime subtlety and a gentle, implacable forward drive.

That's Jimmy Cobb in the drummer's chair, The Jimmy Cobb, from the original Kind of Blue date. He is masterfully understated throughout, supplying always impeccable time and light textures.

Miles Davis created a wide range of sound in his long career—from the bop of his Charlie Parker sideman days in the late forties and early fifties, though the modal attack of the mid-sixties into the fusion birth of the late sixties and early seventies. A tribute to take it all in would never work. Di Salvio's zeroing in on the 1959 time frame makes perfect sense, especially since his sound—a light touch, the impossibly beautiful clustering of chords—parallels the Wynton Kelly/Bill Evans approach.

The addition of the vocal quartet on two tunes—a gorgeously pure melding of four human voices on "Essence of Green" and "Good Morning Santa Cruz"—is an unusual move that works wonderfully, and makes one wonder why it isn't done more often in jazz.

Ron Di Salvio's Essence of Green pays tribute to Miles Davis' 1959 sound rather than recreate it. It is a brilliantly-conceived, beautifully-executed work.