By Anthony Shaw
February 1, 2017
Sign in to view read count 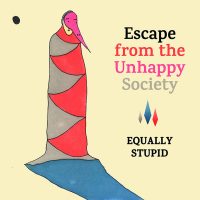 This second album by Equally Stupid sees the same transnational crew of three gents working in the same vein as their first Exploding Head, blending Rögnvaldsson's astringent guitar with saxophonist Pauli Lyytinen's this time more mellow tenor. David Meier is still holding things together with a strong physicality behind the drums, but from the cover onwards there's obviously a major change of style.

I wonder if they have been listening to John Cale or Arvo Pert as Escape from The Unhappy Society seems less cut-loose than the first album, with greater respect for the notes left unplayed, and maybe more melodic undertows, as well as a lot more reverb! 'Fools Paradise' starts with a lilting phrase on the sax, picked up and given a chunkier rhythm by the guitar before returning to again a mellow exploration of the same line, with swelling arpeggio accompaniment and some very gentle brushed percussion.

Where their first outing was brash, impatient and edgy within the domain of improvisational jazz-rock, this album is measured and slightly polished, as if 3 years of work has knocked some of the corners off their quest. There's still enough angular interaction between the two lead instruments, which to my ear works best when there's a hint of humour, as in 'Paranoia.' The sax and guitar chase each other around a geeky riff before the guitar takes off on a lyrical solo, before reverting to joint geekiness.

How reverently to take instrumental music is an issue at the heart of all 'serious music,' but it's so refreshing when professionals show their human side, and help us to laugh at the inscrutability of audio art. These three young Europeans certainly take their music seriously, but would probably subscribe to the late Daevid Allen's dictum that 'music is far too important to take seriously'

Politician’s Nightmare; Birdlife; Legacy to the Children of the 21st Century; Fool’s Paradise; Cruising Back to Mother Earth; The Garden of Edward James; Paranoia; Transpiration; Escape from the Unhappy Society.