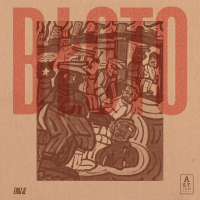 Look closely and the sleeve art resembles a painting by Ghariokwu Lemi for one of Fela Kuti's 1970s albums with Afrika 70. In the foreground, policemen beat citizens to the ground. In the background, another policeman leads someone off to a paddy wagon. Only the policemen's mobile phones locate the scenario in more recent times. Could it be Minneapolis, June 2020?

Anyway, once you are past the dreamy soundscape of opening track "Kaluze," with its suggestion of Miles Davis' In A Silent Way (Columbia, 1969), Erozje enters the dystopian present of the cover art. For the next forty-plus minutes you are in for a bumpy but stimulating ride which takes in skronk, free improv and hip hop beats, and where mellifluous Davis references make way for grittier ones such as Bitches Brew (Columbia, 1970) or On The Corner (Columbia, 1972).

Polish quartet Bloto (The Mire) is a side project by musicians from the country's larger jazz meets hip hop collective EABS, and Erozje is the group's debut album. In English, the title means erosion—erosion of the earth but also of erosion of civil liberties, free speech, evidence-based policy making and consensual policing. Western Europe and the US are in the 2010/20s experiencing this erosion for the first time in around sixty years. In Poland and Eastern Europe it is more familiar.

All this comes through in the music, in which the electric keyboards and synths of Marek Pedziwiatr figure large. The album was recorded on a last minute impulse in a studio near Gdansk on a rest day during EABS' summer 2018 tour. It is an in-the-moment affair with motifs rather than tunes and only the most basic head arrangements. It is a vibe familiar to jazz audiences in Britain and the US, but apparently a new phenomenon on the Polish scene, where Erozje is creating something of a storm.