By Dan Bilawsky
September 15, 2016
Sign in to view read count 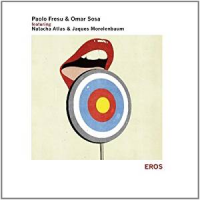 While the connection between Cuban pianist Omar Sosa and Italian trumpeter Paolo Fresu was established back in 2006, their partnership truly blossomed with Alma (Ota Music, 2012), a beauty of an album with a soft sell approach. That record—quite possibly the most moving item in either man's discography—prioritized heart over all else, and this follow-up date follows suit.

Eros—the god of love—serves as muse and sculptor on this easygoing outing. Sosa and Fresu are both in fine form, lulling the listener into a space where the many different faces of love serve as guides, and they bring a smart mixture of passion and prudence to bear in the music. That's evident from the start, as "Teardrop-Ya Habibi"—a clever take on a Massive Attack song, featuring vocalist Natacha Atlas—takes flight. Arabian sounds, hints of neo-soul, and moody notions are all blended and molded into a shapely design that's simply mesmerizing.

Elsewhere these two move in different stylistic directions while maintaining that same balance, addressing the need for emotional release and restraint. "Sensuousness" and "What Lies Ahead"—pieces which utilize the rich cello work of Jaques Morelenbaum—capitalize on candidness. Lyricism and wistfulness take hold and never let go. Then there's "Zeus' Desire," a number that blends new age sentiments with quaint thoughts and positive spirits; "My Soul, My Spirit," a work that features Atlas and operates in a cinematic realm not too far removed from the work of Lisa Gerrard with Hans Zimmer; and "Eros Mediterraneo," which opens on Fresu in a pensive state before shifting to sunnier environs. All of it is of a piece, yet each track has its own identifying markers and personality traits.

Both Sosa and Fresu are masters of putting across moving thoughts. They say more with less, artfully color their true voices with electronic effects, and place equal value on atmosphere and substantial thought throughout these understated tales of love.

Teardrop - Ya Habibi; Sensuousness; Zeus' Desires; Brezza Del Verano; My Soul, My Spirit; La Llamada; What Is Inside; Himeros; Who Wu; Eros Mediterraneo; Fradelo; What Lies Ahead; Why.