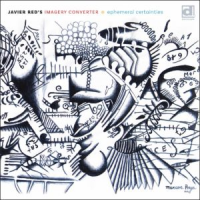 Pianist Javier Red hails from Mexico, but since 2015 he's been part of the ever-dynamic Chicago jazz scene, enabling him to team up with three other Windy City-based colleagues on Ephemeral Certainties, the debut disc from a band he calls Imagery Converter. With a shared commitment to finding purpose through diverse melodic fragments and disparate rhythmic figures, the group plays with disciplined energy and a respect for the unexpected, always leaving room for new directions to emerge within these eight substantial tracks.

Tenor saxophonist Jake Wark has a warm, precise delivery, perfect for pieces that rely on subtle give-and-take and oblique revelations. He can do a lot with a little, starting with some staccato bursts on "Minimal Expansion" and working them over alongside Red's own elliptical phrasing, gradually elongating his statements in conversation with Red, who becomes similarly more voluble as the piece progresses. And bassist Ben Dillinger works terrifically in tandem with drummer Gustavo Cortiñas, who shifts rhythmic gears so frequently that it's a marvel that the band's expressions remain so cohesive. His skillful negotiations in "Stretched Particle," a piece with some remarkably elastic grooves, are especially impressive. He never dominates the track, even though his malleable presence is essential to the rhythmic thrust of the music.

Red shows himself to be every bit his partners' equal, with a deep sensitivity that colors his classically-inflected solo reverie to begin "Suspension," but with an energetic side that emerges front-and-center on the vigorous opener, "Minimal Pieces," during which he generates momentum both in his punctuated support for Wark's gregarious solo as well as in his own fleet exploration of the keyboard. But this is one of those recordings where individual virtuosity is decisively subordinated to the group concept: one never gets the impression that these players crave attention personally that they would rather have directed toward their collective product.

As engaging and well-conceived as the record is, some might want a bit more fire, and the group does open that possibility on the closing track, "Saturation," where the band raises the temperature a notch or two with a pulsating rock rhythm that spurs some tenacious soloing from both Wark and Red. It's a somewhat brief venture, however, on what is the album's shortest track. Even so, for its realization of cerebral yet accessible music played with poised assurance, this is an exciting recording that points to a very promising future for these four talented Chicagoans.