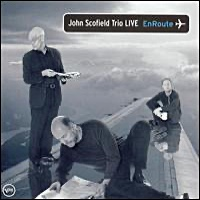 Some artists are revolutionary, making periodic stylistic leaps that herald in a completely new direction or approach. Others are more evolutionary, with a gradual development that often unfolds over a number of years. John Scofield clearly falls in the second camp; while the context of his albums may vary wildly from one to the next, the actual meat of his style has matured at such a slow and steady pace that differentiation over the short term might be difficult to discern. But compare one of his earlier albums, like 1981's live trio recording Out Like a Light , with his new trio release, the live EnRoute , and you'll find an artist who has, in fact, made quantum leaps in his growth as a player, writer and bandleader.

The two records share another common element, that of bassist Steve Swallow who, along with drummer Bill Stewart, lends an energy to the proceedings that is characteristic of many of Scofield's bands. But whereas Scofield has spent the last couple of years on jam-band turf with his younger quartet, this record returns him solidly to jazz territory, although with grooves from the New Orleans grease of "Hammock Soliloquy" and "Over Big Top" to the up-tempo swinger "Travel John"; from the straight-ahead blues of "Bag" to the tender reading of the Bacharach/David standard "Alfie," this is hardly a mainstream set.

Aside from a clearly more mature linear conception, since the early '90s Scofield has also grown considerably as a chordal soloist. The roots of this style go as far back as his early '80s trio with Swallow, but his harmonic sense is now just that much deeper.

Recorded during a weeklong engagement at New York City's Blue Note in December of 2003, the album manages to capture the energy that was clearly in the room at the time. This, in no small part, thanks to Stewart, who continues to be as inventive as always; of his generation he is arguably the drummer who most ably combines a solid footing in tradition with a more progressive rhythmic edge.

But everyone rightly smokes. Scofield, armed only with a guitar, amp and whammy pedal, his one nod to the more effects-laden work with his quartet, burns through Swallow's contrapuntal "Name That Tune"; Swallow blends an ability to anchor with inciting Scofield to further heights; the riff-based "Over Big Top" gradually builds in intensity, never letting up over its eleven minute duration.

Scofield has managed to attract a whole new generation of listeners to his music through his association with his current jam-band quartet. And the good news is that the success of that project has resulted in those same listeners checking out more straightforward projects like EnRoute. In a time where jazz is a marginalized genre, that's a remarkable achievement.