BY FREDERICK BERNAS
September 19, 2007
Sign in to view read count 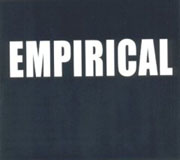 It's a startlingly mature set for such a young group, undoubtedly as a result of time spent playing together in Tomorrow's Warriors, a development program which has seen the likes of Denys Baptiste, Soweto Kinch and Tony Kofi pass through its ranks over the years. All of these have become established names on the UK jazz scene and Empirical looks set to follow their lead.

The opening track, "Blessings, is a crisp, quick, swinging post-bop melody penned by saxophonist Nathaniel Facey. The composer moves into the limelight, taking the first solo with a pleasing dexterity, and is flawlessly overlapped by Jay Phelps on trumpet. It's clear from the start that a near-telepathic understanding exists within the group and this gently whets the listener's appetite for what is to come.

A strong African influence is present on a couple of tunes: Ali Farka Touré's "Tulumba is delightfully arranged by Phelps, with a meditative overdubbed opening passage taking off into a whirling frenzy of collective improvisation. It's a shame this track was cut to less than four minutes, as it fades away into nothingness just as pianist Kit Downes is setting out his ideas. The first few seconds of "The Deep recall the opening of A Love Supreme (Implulse!, 1964), as Facey's wailing sax borrows a touch of John Coltrane's phrasing. However, this ten-minute offering moves into other directions as a spiritual chant begins and extended solos follow. Chanting then returns at the end, apparently depicting the emptiness of deep, unexplored regions of the ocean.

Drummer Shaney Forbes displays a loose affiliation to hip-hop in the album's longest track, "Palantir, which clocks in at nearly seventeen minutes. During movements of this composition and on "Clapton Willow, "Kite and "Dark Lady, Empirical demonstrates its aptitude for intimate, more sensitive moods—as opposed to freewheeling, dynamic and fast-paced jams.

This is a highly promising release from a band which can only go from strength to strength. All tracks but "Tulumba are originals, with a multitude of influences and fresh, excitable energy in abundance.