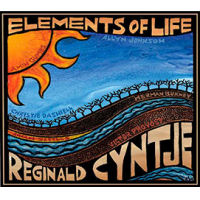 Born on the island of Dominica and raised on St. Thomas, USVI, trombonist Reginald Cyntje has been mixing cultural heritage with black American music from the beginning. Growing up in the US Virgin Islands (USVI), Cyntje was immersed in the rich cultural music known as Quelbe (the official music of the USVI), which is based primarily on African, European and North American cultures and musical structures. One of the key characteristics of Quelbe is that there is improvising in the music and this was one of the key elements that Cyntje delighted in. Cyntje states "One of my favorite Quelbe songs is 'Queen Mary,' it has a powerful message set to a syncopated rhythm. This song sets the tone for my mission as a musician—to inspire change with music." With a strong cultural heritage at the forefront and social justice as the message, Cyntje has a deep-seated knowledge of Caribbean music and culture which has settled into his jazz trombone playing.

Cyntje is a graduate of the University of the District of Columbia and is currently working on his master's degree at the University of Maryland. As a trombonist, educator and activist, Cyntje has performed with: Dr. Billy Taylor, Illinois Jacquet, Martha Reeves and the Vandellas, Dion Parson and the 21st Century Band, Ron Blake and many others. After sharing the stage with his mentors for many years, Cyntje finally released his highly anticipated debut album Freedom's Children: The Celebration in August of 2011. In 2013, Cyntje released his sophomore album simply titled Love. The Washington City Paper said Love is "thoughtful and surpassingly gorgeous." Love made it to #10 on the CMJ Top 40 Jazz Chart. The album is a tribute to the human spirit.

Cyntje expands on the concept of the album, "In September of 2013, I began meditating on the relationship between the human spirit and elements of life. The Omnipresent Supreme Being in fire, earth, sky, water, wind and every living creature. With the help of Allyn, Amin, Brian, Christie, Herman and Victor, the music came to life. When the elements are in balance, we have a harmonious environment for growth, health and happiness. In each of us, the elements are at work. There are times when one element seems to prevail."

The title track, "Elements of Life," according to Cyntje, "explores the concept of finding joy in all aspects of life. Our theme song plays consistently to remind us of our destiny. We have a purpose on this planet. We've been given the gift and responsibility of mother earth." The tune starts with Cyntje and vocalist Christie Dashiell stating a bluesy melody in unison over a calypso/jazz feel with steel panist Victor Provost providing commentary between the phrases. The melody is presented with an A and A prime form with pianist Allyn Johnson taking the first solo, starting with a nice arpeggiated figure that he builds to a climax and the introduction of a rhythmic motif that is then developed throughout the solo. Bassist Herman Burney and drummer Amin Gumbs keep things locked in and moving under Johnson as he builds his solo to a logical conclusion. Saxophonist Brian Settles starts his solo with well-placed tension notes, emphasizing the flat 9 and a natural sixth against the minor harmony. The ensemble methodically builds under Settles angular lines and quick flurries which eventually give way to Cyntje's trombone entrance. Starting with held notes, Cyntje's warm toned trombone ultimately settles in on a bluesy figure that he then develops through the changes. Clean articulation and excellent intonation are represented throughout Cyntje's solo. Provost takes us even deeper into the Island feel with an excellent pan solo, full of smart lines and clear melodies with big ears from the ensemble. Gumbs has the last solo statement with an energetic, but cohesive drum solo that leads us back to the head and a clear ending.

"Fire" fittingly starts with a drum intro that leads to an enjoyable melody set to a jazz waltz feel that is orchestrated with horns, steel pan and voice weaving in and out of unison with flowing counterpoint and harmonic support in various places. Cyntje keeps the central melody clear by orchestrating it in the voice and keeping the harmonic color and counterpoint to the horn and steel pan. Both Provost and Johnson weave out first-rate solos and the music just feels good, with lots of "Fire." Cyntje begins his solo with growls from his bone before he settles in and fans the flames. The ensemble listens, building each phrase with Cyntje. Gumbs commentary with Cyntje is especially enjoyable. Settles leads us through the changes next, with the return of the melody and a nice vamp with some group blowing for the ending. The phrygian modal color and intense listening and playing keep this fire glowing hot.

Cyntje further explains the concept behind the compositions and emotions of the music, "the tree of life requires balance. There is a mutually beneficial relationship between human beings and trees. But the pendulum has shifted. What if the trees took a stand and marched for their rights? The "March of the Trees" is inevitable. The intricate root system that connects us is being severed. Without the trees, we lose our rivers, oxygen and soil. Will we find balance? We can ultimately decide "The Aftermath." It might take one or two... We can find balance within and nurture change in our community. Hopefully we can all work towards a better Eco system. Not one primarily based on ego."

There is a balance in the nature of Cyntje's music on Elements of Life. His compositions are clear and utilize the strengths of his capable ensemble. The music visits many styles and has a nice variance of intensity and tempos. Cyntje's focus on love and harmony comes through in the music, one is sure to find a message that encourages a person to go their own way, to listen to your heart, to have faith in the urgings from within and to follow them.