By GLENN ASTARITA
June 28, 2012
Sign in to view read count
Track review of "Beratche from Prespa" 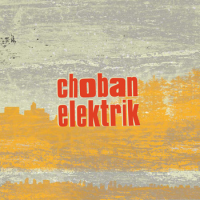 "Beratche from Prespa" is an Albanian dance, treated with Shapiro's psychedelic guitar parts, concocted on grunge-rock and gravelly keyboards-based intonations. With linear progressions, the piece strikes a balance between reckless abandon, playful havoc, and a rather holistic stance, thrusting Balkan music into unshielded terrain.

Shapiro seldom forsakes the Balkan vibe, but embeds the core attributes within a layered approach, offering a sliding scale of sorts, between customary fare and post-modern expansionism. The band's divergent tactics waver between progressive rock, psycho-rock, jazzy inflections and other genre-crossing factors that fluctuate on a per-track basis. A compelling artistic statement, modeled with a clear-sighted vision that sustains interest via a highly entertaining form factor.