Eleni Karaindrou: Elegy of the Uprooting

By JOHN KELMAN
September 29, 2006
Sign in to view read count 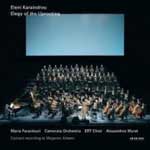 Some film scores only work in conjunction with the movie. However, composers like Bernard Hermann and Ennio Morricone have created scores that also succeed as independent pieces of music. For over twenty years, Greek composer Eleni Karaindrou has been scoring films, most notably for director Theo Angelopoulos. For the past fifteen years ECM has been documenting her work on half a dozen records, including The Weeping Meadow (ECM, 2005).

Karaindou's music is often built around repetitive themes differentiated by an astute understanding of instrumental combinations that support a film's narrative. Deeply evocative and compellingly independent of the films for which it was written, Elegy of the Uprooting is Karaindrou's first live recording for ECM, bringing together music from nine scores, reshaped into its own distinct narrative.

Karaindrou's soundtracks often rely on a mix of conventional and traditional instruments as well as choirs and orchestras. For this ambitious performance she brings together 110 musicians, including a fourteen-piece ensemble of conventional instrumentalists, and a sextet featuring traditional instruments like ney, bendir and kanonaki, a choir and an orchestra. Rather than simply reproducing portions of the original scores and playing them as distinct entities, Karaindrou mixes the music up to create what is, essentially, a brand new soundtrack with its own story to tell.

What's most remarkable about the 93-minute performance is how it defines a greater overriding arc over Karaindrou's entire body of work. The first disc opens with the delicate "Prayer" from The Weeping Meadow (2004), where the string orchestra creates a lush but delicate foundation for choir, harp, French horn and the fiddle-like Constantinople lyra, each of which emerges briefly as a solo voice.

Karaindrou's piano is featured alone on "Refugee's Theme" from The Suspended Step of the Stork (1991), a gently melancholic miniature that leads into the equally mournful beginning of the title track to The Weeping Meadow, but ultimately turns dramatic when the strings enter with a more clearly defined pulse. The emotional shift achieved by returning to an orchestral pedal tone but changing the primary voices to oboe and Constantinople lyra make "Dance," from Ulysses' Gaze (1995), an almost inevitable response to what precedes it.

The only shame is that the limitations of a CD require that the performance be spread over two discs. The understated dramaturgy of the concert would be better served if it could be experienced in its entirety. Still, that's a minor and irresolvable quibble about a performance that, in its haunting beauty and sometimes stark melancholy, remains so captivating that it's over before you know it. Elegy of the Uprooting is the perfect introduction to Karaindrou—and, for her existing fans, proof that her entire body of work is building into a whole that's far greater than the sum of its parts.

CD1: Prayer; Refugee's Theme; The Weeping Meadow; Dance; An Ode of Tears; For the Phrygian Land Vast Mourning; By the Sea; Depart and Eternity Theme; Rosa's Aria; Memories; Hecuba's Lament/Hecuba's Theme II; Telamon, You Came to Conquer Our Town; The City That Gave Birth to You was Consumed by Fire; An Ode of Tears; Theme of the Uprooting I; The Weeping Meadow II; Voyage; Voyage to Cythera; On the Road. CD2: Parade; Return; Andromache's Theme; The Land I Call Home; Home of My Forefathers; I Wish I'm Given There; Refugee's Theme; The Seagull; Song of the Lake; Adagio--Father's Theme; In Vain the Sacrifices; My Beloved, Your Soul is Wandering; Decision; Farewell Theme; Theme of the Lake; Hecuba's Theme II; Lament for Astynax; Exodus; The Weeping Meadow.