By Walter Kolosky
November 17, 2002
Sign in to view read count 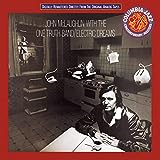 The last three minutes of "Desire and the Comforter" from Electric Dreams say it all about John McLaughlin. He just tears apart his electric guitar with cascades of funk, blues, rock, jazz, and Far-Eastern scales. Every strike of a string has individual meaning. His guitar soars above the chord changes and captures the spirit of the music. He leaves space (or texture) where it should be left. Like no other guitarist on earth, John McLaughlin knows when not to play, despite claims from those who say he plays too many notes. And even though there are a million notes a minute on this tune, the spaces in between the notes create the epiphany.

McLaughlin recorded Electric Dreams with the One Truth Band, which also included L. Shankar on violin, Tony Smith on drums, Stu Goldberg on keyboards, Fernando Saunders on bass, and Alyrio Lima handling various percussion duties. The OTB was a much more rhythmic unit than JM's previous bands, and although its members may not have been the "master" musicians like those who comprised The Mahavishnu Orchestra, they certainly knew how to "funk a groove". Electric Dreams is full of such grooves and infectious tunes. Sure, we could have lived without the God-awful "Love and Understanding". But Electric Dreams offers the beautiful "Electric Dreams, Electric Sighs", featuring JM on banjo! The classic “Dark Prince” is a brooding, straight-ahead jazz-fusion homage to Miles that overshadows the album’s other Miles tribute piece, “Miles Davis."

On this recording, McLaughlin used a guitar that had a scalloped fret board. The concave spaces allowed McLaughlin to stretch notes beyond believability. A main component of the band's sound, Shankar's far-eastern violin, does seem ill placed at times, and Goldberg's synth patches are outdated in some areas as well. But, these issues actually endow the album with a bit of charm. The veterans Smith and Saunders make for a very steady rhythm section. Lima is more effective in concert than on this recording. Saxophonist David Sanborn, a guest star on several McLaughlin albums, makes a more than welcome guest appearance on the haunting “Unknown Dissident”.

The mix wasn't always successful. But on the whole, Electric Dreams offers some of the best composing and playing of McLaughlin's career and has been unfairly overlooked.