BY KURT GOTTSCHALK
September 23, 2005
Sign in to view read count 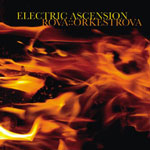 Electing to interpret for the second time John Coltrane's seminal free jazz blowout Ascension was an odd move for West Coast sax quartet Rova to make on the band's 25th anniversary in 2003. Their motives aside, what it amounted to was restaging one of the band's least interesting records—based on a morass as individual as a fingerprint to begin with—and adding eight guests who toted along samplers, turntables, and violins. It would seem to hold about as much interest as waiting for the new Guns N' Roses album.

The problem with Rova's first stab—John Coltrane's Ascension (Soul Note, 1996)—was that it sounded an awful lot like John Coltrane's Ascension. They were joined by Glenn Spearman, Dave Douglas, Raphe Malik, and others to mirror Coltrane's 1965 lineup. And mirror they did. The album left little more sensation than that, yup, they had played Coltrane's piece. But by 2003, Rova (Bruce Ackley, Steve Adams, Larry Ochs and Jon Raskin) had come up with a way to approach Coltrane's monolithic piece: take the swelling horns of the original and use them to frame a suite about contemporary free improv.

Much of this 2003 recording sounds little like Coltrane's original, and much of it is truly great. Electronics are more than prevalent (wielded by Chris Brown, Ikue Mori, and Otomo Yoshihide), and the violins (Carla Kihlstedt and Jenny Scheinman) are lyrical and challenging. Don Robinson's drumming is superb, keeping pace with the many changes in mood and mode; and Fred Frith, having dusted off his electric bass, anchors the delicate balance rather perfectly. Guitarist Nels Cline, who previously recorded Coltrane's Interstellar Space duets with Gregg Bendian, shapes and molds without overwhelming, until his turn to take flight.

There's a temptation among the keepers of the Trane flame to hold on to the sounds of the '60s as if their life depended on it. Which it doesn't, of course. Were he here today (at a mere 79 years of age), Coltrane would no doubt be pushing boundaries as much as he did in his final years. And no doubt he'd approve of his Ascension, forty years old last June, electrified.