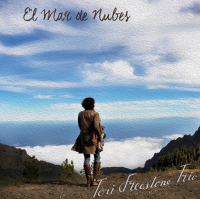 The third album by Tori Freestone's trio, following her debut In The Chop House (Whirlwind Recordings, 2014) and follow-up El Barranco (Whirlwind Recordings, 2016) is no less intriguing than its two predecessors. As with El Barranco, she takes her inspiration for El Mar De Nubes from her visits to the Canary Islands and, specifically, from Tenerife's mountainous terrain on its north-eastern corner, at the Mar De Nubes (literally translated as a "Sea of Clouds") with its spectacular, breathtaking vista, as dramatically depicted on the album's cover art.

The musical challenges of this chordless trio are easily matched by their exceptional skills and imagination. Freestone reveals that her 2017 visit to this region of Spain coincided with a visible "supermoon" which informed the composition of the title track. The languorous version of "Shenandoah" is arguably the most affecting track on the album, with Freestone etching out the tune on tenor, accompanied by Dave Manington on lugubrious arco bass and Tim Giles' gentle beater-struck drums.

Manington's "Hasta La Vista," replete with its riffy melody, is evocative of the indelible tracks found on The Trio's (John Surman, Barre Phillips, Stu Martin) eponymously titled album. By contrast, the ascending head to Manington's ballad "El Camino" is almost reminiscent of the theme to Gershwin's "Someone To Watch Over Me." Sam Rivers' "Beatrice" is given a respectful reading and its stately pace affords ample opportunity to spotlight all three musicians individually. "Los Indianos" (Las Palma's carnival) benefits from a sprightly Latin-esque rhythm and a teasingly repeated saxophone motif.

As her parting shot, Freestone revisits "Shenandoah," with the song's natural poignancy emphasised by her deployment of voice and violin in lieu of saxophone. This, incidentally, is the same tactic she employed on "The Press Gang" from El Barranco, where she reprised the album's instrumental version as a song. With El Mar De Nubes Freestone has once again executed a recording of refined beauty and balance.