By Troy Collins
November 27, 2008
Sign in to view read count 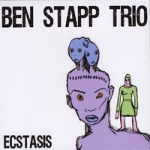 It's a prime example of the new globalism. California-born tubist Ben Stapp graduated from UCLA, studied with English tuba master Roger Bobo overseas, then spent additional time studying in Portugal before returning home to record his debut album, Ecstasis. Demonstrating nimble dexterity and a keen melodic sense, the youthful Stapp holds his own in the heavyweight company of saxophonist Tony Malaby and percussionist Satoshi Takeishi.

The trio vacillates between the written and improvised with poised authority and an empathetic rapport that blurs the line between freedom and form. Stapp's melodious variations complement Takeishi's ceremonial fanfares and kaleidoscopic accents, providing the trio with a harmonically solid, yet rhythmically fluid foundation that veers from buoyant to introspective. Malaby reigns in his extroverted tendencies, splitting his time evenly between soprano and tenor, while embellishing Stapp's memorable themes with lyrical restraint.

Despite the limited instrumental palette, Stapp utilizes an array of inventive arrangements to provide the trio with ample space for individual expression. Unaccompanied cadenzas, intimate duets and collective improvisation are all featured alongside more conventional devices, like hypnotic bass ostinatos and concise call and response, keeping the structures malleable and joyously unpredictable.

A credit to both the trio's conversational interplay and Stapp's resilient writing, the session flows with the graceful logic of a suite rather than a collection of disparate tunes. Ecstasis marks the solid debut of a fresh, new voice.