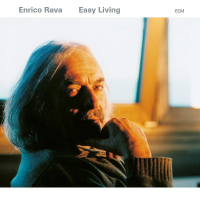 After nearly 20 years away from the label, Italian trumpet legend Enrico Rava makes a triumphant return to ECM with Easy Living , an album that proves that a relaxed, unforced approach can have its own kind of quiet intensity.

Comparisons can be made to Polish trumpeter Tomasz Stanko who, also in his 60s, has similarly developed a penchant for a mellower, more soulful approach. Both artists have surrounded themselves with young musicians from their own countries. But there the similarities end. Whereas Stanko's tone is sharp and raspy, Rava's is as rich as a box of dark chocolate; his sound is so warm that it can sometimes be mistaken for flugelhorn.

Rava exercises seemingly effortless control over his instrument. On "Sand" he hits and holds high notes with the kind of command that is heard from few others, perhaps only Kenny Wheeler. And even when he reaches for the high end of his horn he is never brash or piercing; his tone is always warm and appealing.

Rava's writing leaves plenty of room for exploration, all the while maintaining a structure that keeps his young quintet clearly focused. With the exception of drummer Roberto Gatto, all the players are in their late twenties and early thirties, but their musical maturity and broad vocabulary belie their young ages. Most impressive are trombonist Gianluca Petrella and pianist Stefano Bollani; both capable of exquisite tenderness, when things are kicked up a notch, as they are on "Hornette And The Drums Thing," they demonstrate true virtuoso capabilities; and Gatto, who for most of the album is content to create a light framework for the rest of the group, delivers a solo that is notable for its sheer musicality.

While not as inherently adventurous as some of his earlier ECM recordings, including The Pilgrim and the Stars and Opening Night , there are many hidden rewards on Easy Living. From deep within these tunes Rava demonstrates a breadth that can only come from a lifetime of playing in many contexts. From near-bop to subtle abstraction, from cinematic excursions to free-flowing lines, Rava is clearly at the top of his game.

With a style that is completely distinctive, a sound that is warm and lush, and the musical maturity of an artist who has nothing to prove, Rava is in fine form. With Easy Living he returns to the label and producer who gave him his first major exposure on the international stage in 1975; here's hoping this is the beginning of a renewed and long-term relationship.