Javon Jackson: Easy Does It 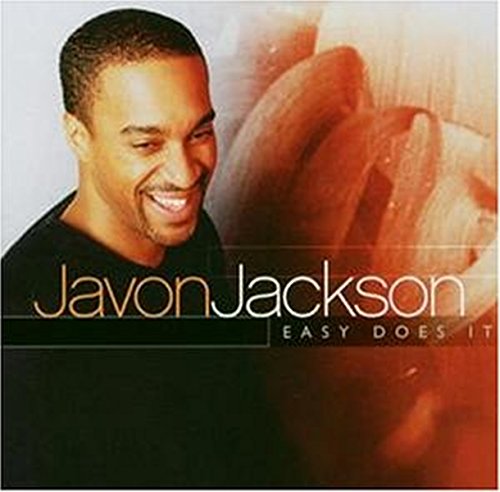 Javon Jackson’s band on Easy Does It is not unlike the Wayne Shorter-Curtis Fuller Jazz Messengers... both boast superb lineups, but only Jackson and his band are steeped in the 21st Century Groove. Mr. Jackson’s previous five recordings for Blue Note established him as fresh new voice in jazz, unafraid of stirring things up a bit. He took that attitude and shot it at light-speed into the Palmetto studios to produce a funk masterpiece.

Mr. Jackson has chosen the right band for such an auspicious occasion. Dr. Lonnie Smith is a groove physician, prescribing grease and greens to all that wears one down. He provides his blues "If You See Kay" to kick things off. Blues... is that what you call this? Jackson’s own "Papa Lou" is definitely a blues circa 1960s Jimmy Smith.

Mark Whitfield plays an understated role here, providing that necessary guitar groove to pieces like Marvin Gaye’s "Right On" and Jackson’s "Kiss," adding a little wah-wah to the latter. Lenny White shows why he was so indispensable to Return to Forever’s sound in the ‘70s. Dr. Smith plays orchestrally on every song he touches. On the title cut, his footwork is potent, laying down a mud thick groove over which Jackson and Whitfield converse. Whitfield gets his most authoritative workout here with Jackson playing harmony and beginning what one hopes is a long relationship with the guitarist. Easy Does It is exactly what Dr. Jazz ordered.

If You See Kay; Right On; House Party; Papa Lou; Kiss; Diane; Wake Up Everybody; Easy Does It; J- Soul.