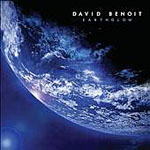 Having emerged at a time when many smooth jazz artists seemed to be in competition to sound alike, David Benoit has always been able to distinguish himself. The pianist has earned five Grammy nominations, and has successfully moved from orchestral to jazz to pop, sometimes mixing all three with other sounds.

Those other sounds include Latin and Brazilian, which are woven into the tapestry of Earthglow. Accompanying Benoit is a varied supporting cast that includes trumpeter Rick Braun, saxophonist Jeff Kashiwa and flutist Tim Weisberg.

"Unbelievable" begins with Brad Dutz's unaccompanied percussive sounds, joined by Braun's muted trumpet and Benoit's piano. David Hughes' electric bass sets the groove during the song's main theme. After a quiet passage, with piano complemented by some ethereal keyboards sounds, the funk comes out, with Hughes and drummer Jamey Tate paving the way. During another quiet passage, Braun breaks out the flugelhorn, accompanied only by piano. The song shifts back and forth between the groove and the placid.

One of the strongest songs in the set is also the shortest, "New Creation." With the percussion giving it a Latin vibe, Benoit enjoys a spirited jaunt, first on piano and then on Rhodes. He packs lot into a limited window.

"Sneaky as a Cat" features Braun on muted trumpet and Weisberg. The melody has a prowling, inner-city vibe, while the background injects some bossa nova, which is an underlying rhythm on a few other tracks. Weisberg's middle solo is accompanied at first only by piano and tablas, but bass and drums join in later. Tate employs some varied textures on the cymbals.

Earthglow is named for the album art, a photo of Earth supplied by NASA. It's Benoit's first recording of original music in four years. The album's one cover tune hardly deserves to be called that. It's a new arrangement of a Benoit classic, melded with Beethoven's "Moonlight Sonata," as if played by the character Schroeder from the Peanuts animated television series, of which Benoit has enjoyed a long association. The title of this anthem: "Freedom at Midnight (The Schroeder Variations)."