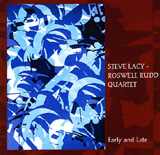 One of the greatest front lines in modern jazz, soprano saxophonist Steve Lacy and trombonist Roswell Rudd were a singular force. From their earliest forays in the 1950s, Lacy and Rudd performed together regularly but recorded infrequently. Besides a handful of Black Saint/Soul Note albums from the early 1980s, there are few documents of their many performances together.

The conceptual thread that flows through all the pieces, regardless of their vintage, is Lacy and Rudd's abiding love for the music of Thelonious Monk. One of his most loyal advocates, Lacy played briefly with Monk in 1960, subsequently recording entire albums of the pianist's compositions throughout his career. Rounded out by a few Lacy and Rudd originals and a rare, early Cecil Taylor composition, the tunes all embody a quirky melodic sensibility, beguiling but slightly skewed; much like Monk's own unique aesthetic.

Early and Late provides an invaluable window into a forty-year collaborative process that ranks among the greatest achievements in modern jazz.