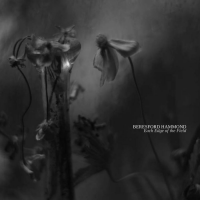 Each Edge of the Field is the third part of a very appealing trilogy of albums, following in the footsteps of The Science of Snow (The 52nd, 2015) and The Lightning Bell (The 52nd, 2016). Where the latter album added pianist Carolyn Hume and guest vocalist Judie Tzuke alongside the former's duo of guitarist & pianist Charlie Beresford and cellist Sonia Hammond, Each Edge of the Field reverts to the original duo alone again. Visually, the three albums are recognisably a trilogy, each one being clad in a stunningly appealing sleeve featuring enigmatic, atmospheric black-and-white photographs by Quebec's Gaëna da Sylva, co-founder of The 52nd label with Beresford.

Musically, this album is unmistakably the work of Beresford Hammond, their trademark sound being instantly recognisable. As on their first duo album, the music is completely instrumental and improvised. The album consists of nine tracks, ranging in length from the forty-four-second introductory piece, "Calling the Corvids," to the nine-minute title track, altogether a running time of forty-three minutes. There is considerable variety across the tracks but together they create a consistent mood throughout, one of calm and tranquillity. The pair act as equal partners with neither consistently leading or dominating. Each of them sounds relaxed within themself and with the other.

Beresford shows he is just as skilful on piano as guitar, and moves between them enough to contribute to the music's variety. While Hammond is a classically-trained cellist, she never displays any of the stiffness or awkwardness some classical players display when improvising, and she never sounds as if she is desperate for notated music to follow. Instead, her responses to Beresford flow naturally and smoothly, contributing immensely to the laid-back mood; ironically, that means that sometimes the music here can almost sound scored!

Although this album completes a trilogy, it should not be regarded as an ending. Across these three albums they have demonstrated that they have the capacity to generate fresh, engaging music endlessly. We must hope that they continue to do so well into the foreseeable future.

Calling the Corvids; At the Moment it Broke; Each Edge of the Field; Wire Fence; Campanulae; Vyallt; The Weathering Yard; Oracle of Strangeness; Crow.