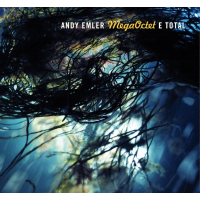 As the 15-page spread in the May, 2012 issue of French Jazz Magazine demonstrated, Andy Emler is a Frenchman with a special gift. Not only a creative composer and arranger, as well as a broadly talented keyboardist, he is the man who has found ways to harness the redoubtable creative energies of his notoriously temperamental countrymen in a large, though not quite big, band. And he's done this for over 20 years. What's more, these fellow Frenchmen include some of the most musically adventurous and colorful on the French jazz scene.

The band is MegaOctet, and the title of the latest album, E total, is a thinly veiled tribute to Emler himself. As a double-CD release that also includes a 20-minute video clip shot during the recording, this is testimony, in itself, to the band's popularity in Europe, justifying this lavishly presented product. The sixth of Emler's output with the band, the title also refers to an approach (could it be total ecstasy?), as well as the key of all seven of these extended pieces.

Emler's compositions seem to develop in an almost ramshackle way, with his piano providing the core—mainly rhythmic bass runs, over and around which the various brass and reed combinations weave counter themes and variations. Typically the resulting crescendo is cacophonous but coherent, and unlike his former mentor Frank Zappa, Emler's pieces usually reach a final resolution of some sort. The tuba may growl, the front line yap and flurry, but around the piano the pieces bound and tiptoe towards a final, sharply punctuated conclusion. "Superfrigo" on the second disc is a classic example.

The pleasure of this album, though, is not so much the assured skill of the individual musicians as the variety of the listening experience. The title track is a good example, starting with eerie screams from a bowed cymbal, evolving into a spiraling piano theme before establishing a driving overture with pounding bass line and caroling brass and reeds. From here, the piece explores the original theme with all the energy of its nine participants, before a final staccato attack segues into a bemused babble of spoken commentary. It looks incomprehensible seen written in black and white but, to ears already attuning to the next haunting opening theme on bowed bass and flute, the mix of melody, mischief and emotion make almost perfect sense.