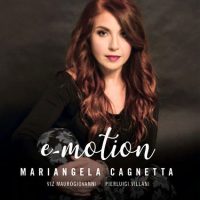 A glance at the track listing on this album might prompt the title of another tune—"So What's New?" However, after a thorough listening, a more appropriate musical response could be "I Never Knew." e-motion is an innovative, fascinating and marvelously performed modern perspective on eleven jazz standards delivered by superior musicians.

The ensemble is minimal—a vocalist, an electric bassist and a drummer. That's it. The musicians' creative output is anything but. Vocalist Mariangela Cagnetta is an incredibly versatile, talented and mature artist. She has terrific vocal chops across the session. It takes a highly competent and involved singer to walk this type of tightrope. Cagnetta is right at home communicating and responding magnificently with ace bassist, Viz Maurogiovanni and master drummer, Pierluigi Villani. She's a gem.

While the program is familiar, each of the arrangements is creatively unique and precisely structured for the trio format. For example, Duke Ellington's "Things Ain't What They Used to Be" gets a hip, rock re-do, as do "Caravan" and a darker feminine take on The Beatles' pop hit, "And I Love Him." The interplay among and between voice, bass and drums is the the marvel of this album— whether it is Cagnetta scatting as a dervish over Maurogiovanni's pulsating bass, Villani's percussive bedrock on "Lazy Afternoon Phunk" or "conversing" in duo with Villani's ace polyrhythmic set and brush work on "Speak Low." Cagnetta's emotional depth and poetic lyric approach is displayed brilliantly on the exotic "Nature Boy," on Mongo Santamaria's "Afro Blue," and the killer closer, "Moon River." Classics "Blue in Green" and "Giant Steps" are recognizable, but delivered with "Lucy in the Sky" kaleidoscope glasses.

Bassist Maurogiovanni, a regular contributor to drummer Villani's sessions, is a Miroslav Vitous / {m: Jaco Pastorius = 10148}} acolyte displaying incredible technical proficiency, deep drive and a bopper's heart. Villani has proven over the years that he's hands-down a world-class musician. They are both creatively outstanding on this session.

e-motion is a terrific recording all around. It is deeply engaging and creatively brilliant. Think "S'Wonderful."