Fight The Big Bull: Dying Will Be Easy 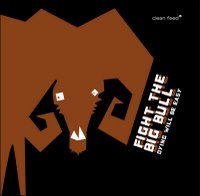 Fight the Big Bull describes itself on MySpace as "champions of curiosity." This candid qualifier is doubly introspective because it denotes both the whimsy and the intellectual maturity of Dying Will Be Easy. The Richmond-based nonet, who played at New York City's Issue Project Room Aug. 6, 2008, is led by guitarist Matt White, who also composed the album's four tracks, which span a little more than half an hour. It is a wholly remarkable feat that an album with so few tracks can be so captivating.

"November 25th" is meat-and-potatoes jazz, smoky and thick in sonic bands with slinky bass bursts that make up its resonating backbone. "Grizzly Bear" shows off the glittery appeal of old-time showmanship, with an aggressive inter-band sonic throw-down. It begins with a celebratory ferociousness and tempers down to a clever, if long, connector until the next climax. This connector, marked by a maniacal tippity-tap of the drums, teases listeners into anticipation. Notes run into each other in a playful collision that results in a tiny explosion that is smoothed, but encouraged, by the bass line.

"In Jarama Valley" is dignified and heartbreaking, a mellifluous treat that, reflecting an admirable sense of self-awareness and good judgment, is almost twice as long as the preceding two tracks. It quickly gives way to a conversation among instruments resulting in a purely synchronic fusing of notes. But once the listener has settled in, accepting every note as organic and inevitable, a violent surge of fury penetrates the track and infects the song, threatening any notion about its supposed mood and tempo being mournful. It sprints to a finish, suddenly but triumphantly.

There are no attention-grabbing gimmicks here. Nothing is irrational, abstract to the point of being confusing or egalitarian to the point of being archaic. In the pursuit of being provocative, many musicians obsess about the art and forget about the matter. Not so with Fight the Big Bull. White is obviously a skilled guitarist, but it is his vision as a composer and orchestrator that makes the record refreshingly original and, at many points, breathtaking.