By JEROME WILSON
November 12, 2016
Sign in to view read count 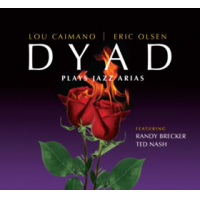 Classical-jazz hybrids, such as the Modern Jazz Quartet, traditionally keep the formal structure of classical music foremost in their work. Not so the duo of Lou Caimano and Eric Olsen collectively known as DYAD. Their version of "Jazz Meets The Classics" is a loose, freewheeling beast that occasionally breaks off from the classical side and follows its own wild improvisational logic..

On this particular CD, Dyad Plays Jazz Arias they have quite a time running merrily through seven well-known operatic arias in both duo and trio formations. Their treatment of the "Habanera" from Carmen is the most accessible example of what they do. Caimano sings the familiar melody on alto sax while Olsen's piano works underneath him in an insinuating, bluesy style that spirals out into a long, gospellish piano solo and piercing, soulful alto. When they finally get back to the "Habanera," it takes a second to remember "Oh yeah, that's where this all started." The same sensibility applies to their frisky rendition of Massenet's "Meditation" and their dives and swoops through another Carmen theme, "Seguidilla."

On four of the seven tracks, special guests are added that give the duo a more full-bodied sound. Randy Brecker's aching trumpet entwines with Caimano's alto to make a romantic film noir theme out of Samuel Barber's "Do Not Utter A Word" and also provides a bright, bubbly presence on a bit of Mozart's Don Giovanni. Tenor saxophonist Ted Nash shows up on the final two tracks, making a swoony sax tandem with Caimano on Delibes' "Flower Duet" over Olsen's brisk Bill Evans-like probing and adding to the stormy delirium of Verdi's "Dio! mi potevi scagliar" with a dark, jagged solo over Olsen's mad pounding.

Dyad have a unique approach to merging jazz and classical music. They retain the beauty of the classical melodies but the jazz soloing is done with real abandon and flair. Their music comes out both stimulating and fun.