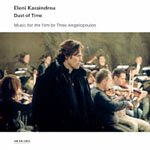 For nearly 20 years Greek composer Eleni Karaindrou has been scoring the films of fellow countryman Theo Angelopoulos, perhaps the single greatest nod to ECM producer/label head Manfred Eicher's ongoing love of both music and film—and, in particular, the way the two, at their best, seamlessly intersect to create something bigger than either one alone. The most obvious and quoted instance of how music elevates film has been Bernard Hermann's memorable score to Alfred Hitchcock's Psycho (1960)—in particular the infamous shower scene—proving that the best soundtracks often act as near-subliminal augmentation to the images, enhancing the emotions, the broader drama and greater subtleties that make a film not just good, but great. Outstanding soundtracks are often more felt than heard when incorporated with film, yet equally stand alone as compelling works.

Karaindrou's legacy of six previous releases of film music continues with Dust of Time, her first following the sweeping live performance career retrospective of Elegy of the Uprooting (ECM, 2006). While there's nothing especially new here—Karaindrou's continued integration of traditional Greek folk music and instrumentation into contexts ranging from small ensembles to full symphony orchestras—it's a largely intimate soundtrack that uses more expansive instrumentation sparingly, with violin, violoncello, accordion and harp the dominant voices in this tale of love lost and regained, told over the backdrop of significant 20th Century events including Watergate, Vietnam, the death of Stalin and the fall of the Berlin Wall.

Largely melancholic, it's Karaindrou's remarkable ability to find perfection in the combination of instruments—evoking with the greatest of care the deep yet subtly worn feelings that are at the core of this moving film—that remains her greatest strength. Whether it's the surprisingly gentle combination of piano with string orchestra on the coda ("Adieu") or with full symphony orchestra on the more dramatic "Seeking," it's Karaindrou's skill at working with the power of silence and greater potential of nuance that avoids melodrama and, instead, explores the nooks and crannies of perhaps a narrower range to create great significance with but the sparest dynamic shift.

Just as Angelopoulos' film possesses a clear narrative, so too does Karaindrou's score create an arc all its own. Exploring shades of feeling with an attention to detail that's made her Angelopoulos' scorer of choice since 1986's The Beekeeper, Dust of Time, in its naked exploration of perhaps the most profoundly human emotion of all, is yet another high watermark in a career defined by musical milestones.