By HRAYR ATTARIAN
December 15, 2020
Sign in to view read count 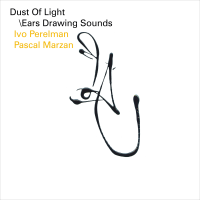 Saxophonist Ivo Perelman is an accomplished improviser whose intrepid experimentations have resulted in one of the most provocative modern music. Despite being prolific, additions to Perelman's discography are always refreshingly innovative partially because of like-minded and equally brilliant collaborators. Joining him on the superb Dust of Light/Ears Drawing Sounds, is the French guitar virtuoso Pascal Marzan.

There is a spirituality that permeates the album, which is peppered with bursts of impressionistic colors. It opens with "Hot Dust-Obscured Galaxies" featuring the pealing strings of Marzan's microtonal guitar and Pereleman's chant-like phrases. The dialogue made up of short, crisp exchanges floats with facility within a dynamic and ethereal melodic structure. The passionate honks and angular strums, nevertheless, maintain an atmosphere of serenity, one laced with melancholy.

The complimentary overlap between the contemplative and the visceral is one of the unifying themes of the album as is its mellifluous dissonance. On the opener, "Bees And Squirrels in the Garden/Two Bees At My Window" Perelman launches into a fiery extemporization replete with yearning wails. Marzan. who like Perelman has totally mastered his instrument, responds with a set of complex chords with breathtaking agility. The conversation is poignant and sometimes angst ridden yet there is a bittersweet lyricism to it that shimmers through the free-flowing piece.

Among the longer tracks there short, almost pastoral tunes that delight in their brevity. "Swinging Swallows," for example, conjures images of birds diving and soaring in crisp and abrupt movements. Perelman and Marzan duet with lithe contrasting lines that create vibrant and jagged imagery. Another is the whimsical "Ears Drawing Sounds." It is, perhaps, one of the purest instances of sonic explorations on the release. The two musicians take obvious delight in playing off one another's note clusters and tonal fragments and are able to imbue their repartee with this joy.

Recorded in London, in February of 2020, Dust of Light/Ears Drawing Sounds is a meeting of two fearlessly creative minds. Perelman and Marzan have achieved something remarkable here. They are seamlessly in synch, all the while maintaining their respective styles. The result is cerebral and moving and makes for a totally immersive and rewarding listening experience.

Hot Dust-Obscured Galaxies; River Mirroring A Smiling Moon; Bees And Squirrels In The Garden/Two Bees At My Window; Sun Through Closed Eyelids; Ears Drawing Sounds; Dusts Of Light/Dancing In Shadowed Forests; Swinging Swallows; Conversation In The Wind/Conversation With The Wind; Calling At The Doorway; High Mountain Walk; Reflections; Mysterious Bells.