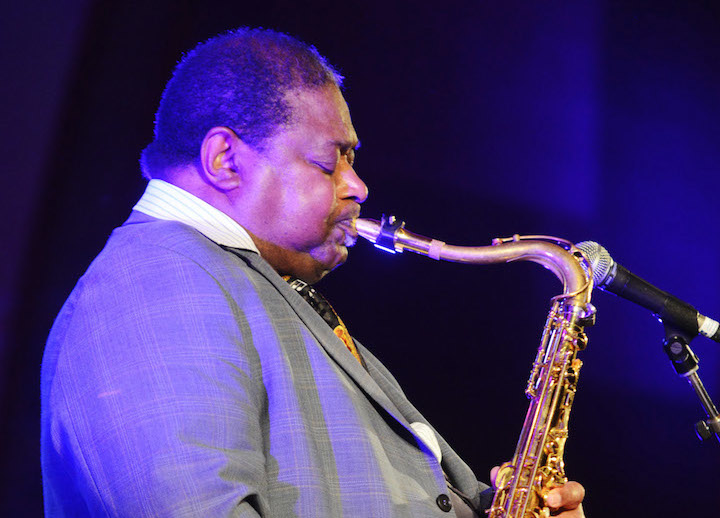 By PHILLIP WOOLEVER
May 16, 2016
Sign in to view read count
Year after year, the Dusseldorf Jazz Rally continues to provide visitors with one of the finest festival experiences to be found in Western Europe. While other events in the region may spend more on self-promotion, feature more prominent line-ups or gather more media coverage, the Jazz Rally cheerfully and consistently serves up what is quite likely the best bargain of the bunch.

The festival originated in 1993 and has enjoyed general stability and growth since it's inception. The weekend just got another boost when a major travel agency, Schauinsland, signed on with a five-year commitment as lead sponsor.

This year's 24th edition, which ran from May 12-15, included over eighty musical acts scheduled on a typically wide range of locations. Most shows are located throughout a central waterfront area along the Rhine, which transforms into a multi-block, carnival atmosphere.

A varied array of outdoor sets is one of the Jazz Rally's strongest attractions. Visitors can wander through blocks of "the world's longest bar" and hear literally dozens of musical acts. Dusseldorf's relatively small, delightfully intimate old town resonates with music and has become a traditional highlight for many locals, with the same social status as national holidays.

The eclectic mix of locations, with-semi-annual switches, has included nearby castles, opera foyers, and an airline hanger. There are also some repeat favorites, ranging from sardine can bars to a gigantic tent along the Rhine, to a legislative building amidst unique architecture in the city's media harbor area.

There's always a great atmosphere for blocks, as the crowd, many well-lubricated from the local beers; relaxes or reacts to the music with a range of everything from enlightened moments to social blasphemy. Anyone strolling through the popular old town area is met with the music, and the untypical jazz audience is always interesting to behold, sometimes a sideshow in itself.

There have always been standout performances, on major and minor scales. Last season's lineup featured two of the best shows to be seen in Europe. One day the Christian McBride Trio put on an educational masterpiece, followed the next by a sublime Pee Wee Ellis and Danny Grissett tribute to Duke Ellington. Considering the range of good shows in an immediate area, it's hard to find a better day of jazz anywhere. Dusseldorf may be the most under-rated festival in the region.

Some of the consistently best shows are by the Sparda Bank contest award winners, who must be aged 18 -28 to qualify. The top three finalists appear for a prominent spotlight set in a scenic public square.

This year, the top attraction was quite likely Klaus Doldinger of Passport fame, a festival patron and fan favorite in a pair of celebratory shows to coincide with his 80th birthday, at the symphony hall.

Another interesting performance arrived with Ukrainian singer Natalia Klitschko, who unveiled her new album as she initiated a tour. She has been in town before with her husband Vitali, mayor of Kiev and former heavyweight champion.

Other featured attractions included the Wolfgang Haffner Allstar Quartet with Viktoria Tolstoy, saxophonist Lakecia Benjamin, the Omer Klein Trio, Enrico Crivellaro, Martin Sasse and Philip Catherine. The dark horse here was Black Milk, a dynamic presence who made strong impressions in Montreux a few years back and performed at a new "Jazz on the (manufactured) Beach" location a few miles from the primary stage area.

If one individual could personify the festival it would probably be Boris Neisser, an engaging fellow who wears many hats for the Rally and seems like a gently guiding spirit. Neisser is a corporate development executive with Destination Dusseldorf, a marketing group that coordinates with the city administration in cultural, sporting or tourist-based events. Along with chief executive Otto Lindner, ace public relations specialist Bettina Schoenherr and a charming, capable team, Neisser attends most sets and keeps everything smooth behind the scenes.

"We are primarily a festival for all kinds of jazz, but we also promote funk, blues, and soul as an important part of our program," says Neisser, with a glance ahead to a gala 25th year. "People always know there will be a lot of music to dance to. We do not want people to just sit and watch all the time. It is important to have a vibrant social atmosphere. Many visitors come and stay simply because of music they heard in the distance, or from the people they observed heading in our direction."

"It is all about the music and the city, and how they come together," summarized Neisser. If rally is a working definition, it also describes the huge, upbeat gathering of the jazz tribe that is Dusseldorf on the traditional, extended Pentecost holiday weekend.

Still, despite drawing tens of thousands to what is regularly Germany's largest jazz festival, the Jazz Rally is not often mentioned in wider circles. Dusseldorf may well be one of the genre's best kept secrets.