BY JACK HUNTLEY
September 27, 2011
Sign in to view read count 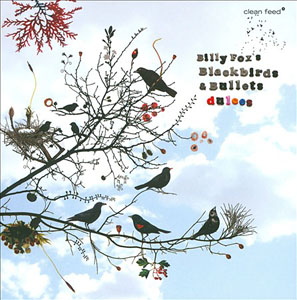 In the liner notes for Dulces, Billy Fox outlines the influence that Bengali writer, artist and composer Rabindranath Tagore had on his own compositional insights, writing "Tagore boldly defied the expectations of each idiom." And after listening to Dulces, it is apparent that Fox learned well. Like his mentor, Fox is able to use various musical idioms as powerful touchstones without lapsing into empty compositional rhetoric. Instead, Fox harnesses the energy and beauty of multiple dialects that culminates in an album of great depth as well as breadth.

Fox, it seems, also has an excellent ear for talent, as he has surrounded himself with a group of highly proficient musicians, Blackbirds & Bullets, capable of giving voice to his nuanced compositions. The band is tight, energetic and fluid throughout. The three horns, especially, are vigorously presented and dynamically move the music through its crests and ebbs. The upbeat Afro-Cuban opener, "Girl Cheese Sandwich," starts with Fox's maracas, James Ilgenfritz's bass and Miki Hirose's brooding trumpet, but then the horns unleash a wave of infectious melody that sways the song into a full-tilt ensemble piece reminiscent of Mongo Santamaria's big band.

"Deva Dasi"" takes the band in a more rhapsodic realm, back again with a Middle Eastern vibe. Again, Fox's band never settles for apathetic imitation, as the music is not defined by a single stylistic element, but gains its energy from weaving in and out of inflective phrases, and by counter-balancing solo or duet instrumentation with the force of the entire ensemble. Notably here, Julianne Carney's biting violin and Matt Parker's tenor sax couple perfectly with Evan Mazunik's dreamy Fender Rhodes piano. Throughout the album, Fox has an ear for layering the instrumentation in unique ways, pairing instruments to gain the most effect. The slightly jarring yet intriguing movement from horns to organ/keys in the opening of "Tatsin" is another example of Fox's talent for building his tunes through unique turns of instrumentation.